Athy dig deep to claim Under 21 Title after extra-time 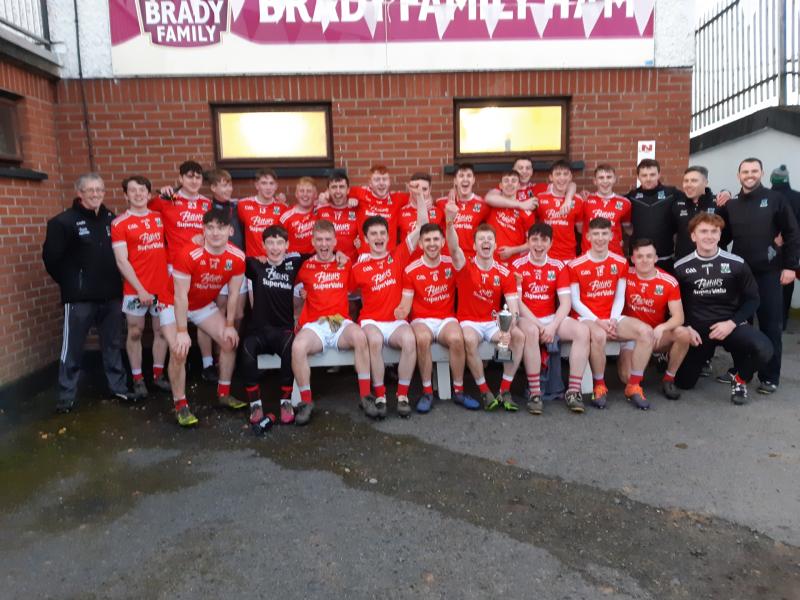 It took all of eighty minutes but eventually Athy were crowned Under 21 B Football champions with a five point victory over Ballymore Eustace.

The game went all the way to extra-time when Tadhg Barrett scored a fortuitous stoppage time goal and Ballymore even had a chance to snatch the win but Simon Murphy missed a late opportunity.

It would have been daylight robbery in a way though as Athy were much the better side and they showed their class in the added on period as they outscored Ballymore 0-6 to 0-1 with Kieran Farrell, Fintan Lawler, Brian Maher and Ben Purcell all kicking over insurance scores.

It’s a fine end to the year for Athy who had members of their Senior team in their management including James Eaton as selector and Kevin Feely as physio.

Ballymore had 13 players on show who are also part of their senior squad that are preparing for a Leinster Junior Championship semi-final this weekend and they had the better start with Niall and Simon Murphy kicking points before Athy’s Donal McGrath stopped a goalbound effort on the line.

Athy eventually found their groove with a brace of scores from Fintan Lawler levelling up matters before Nick Jackman kicked them in front.

Simon Murphy fisted over an equaliser in the 11th minute but again Athy kicked on with points from Lawler and Brian Maher.

It was then tit for tat for the rest of the half as Athy maintained their two point lead with Maher, Kieran Farrell and Sean Moore on target and although the two Murphy’s replied for Ballymore they still trailed at the break as an entertaining half ended with Athy leading 0-8 to 0-6.

Niall Murphy kicked his third point at the beginning of the second half for Ballymore but Athy continued to have the edge as after Sean Moore kicked over Brian Maher rattled in a 35th minute goal to give his side a 1-9 to 0-7 buffer.

Athy looked in an ideal situation at that stage but despite Maher, Lawler and Farrell adding on points they could never properly fend off their opponents.

Athy had chances to kill off the game there and then but after failing to do that they were punished when in the fifth minute of injury time Ballymore found the net as Tadhg Barrett hoofed a long ball into the square where both Simon Murphy and Matthew Anderson went up to compete but it evaded them and went into an empty goal to set up extra-time.

With darkness almost descending on St.Conleths Park Ballymore looked to have the momentum but they only scored one point in the added on time as Athy found another gear.

Niall Murphy got Ballymore’s sole effort with Athy sub Ben Purcell having a big impact as he kicked three point on his introduction and with Lawler, Farrell and Maher on target once more Athy took the win.