With military precision, Susan Anderson of LittleHills Animal Sanctuary planned a two day rescue mission for 900 laying hens about to literally, face the chop. With a dedicated number of volunteers, a two day rota was scheduled and thanks to social media and local press, there was a full response from the public to find homes for all 900. Day 1 entailed delivery from Gorey to Greystones, then over to Ikea in Finglas with the last stop at Killashee, Naas. Families were literally lining up outside the iconic entrance to Killlashee, baskets and boxes in hand. For young Jamie and Ciara Dunne of Feighcullen, Rathangan, adopting the hens posed another problem – what to names the new chucks! “We have Becky and Pecky, Feathers and Clucky, maybe Mollie”.  But with six hens ordered, the brother and sister were undecided on the final name. Junior Eustace travelled from Manor Kilbride to collect a dozen or so, whilst families from Grangenolvin in Athy, Crookestown and all over Co Kildare came to collect the feathered layers.  A second route was undertaken by Michael Murphy and helpers heading to Portlaoise, Limerick, Killarney and Cork. Sunday saw Chicken Run 900 come to a conclusion with the final drop-offs at Carlow, Tuallmore, Athlone and finally, another drop at Killashee. Whilst Susan Anderson of LittleHills Rescue and Animal Sanctuary was delighted with the success of the chicken mission, she has previously managed to find homes for up to 22,000 hens. See LittleHills Animal Rescue & Sanctuary on Facebook for other animals requiring homes. The rescue centre will feature on popular TV programmes Ireland’s Animal Rescue and Pet Island. [caption id="attachment_40201" align="alignnone" width="300"] 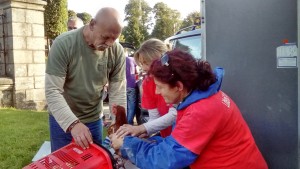 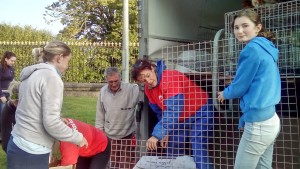