"Heartening and unreal" is how Carmel Cashin described yesterday's response to the Syrian Support & Welcome-West Wicklow appeal for warm clothing and toys. Along with three other women, Carmel set up a Kildare group about two weeks ago and the group were overwhelmed with the response, hence she established another base for West Wicklow. "It did my heart good to experience the response; we organised collection points in both counties and are now working with the Newbridge Volunteer Centre" said Carmel. [caption id="attachment_42071" align="alignnone" width="300"] 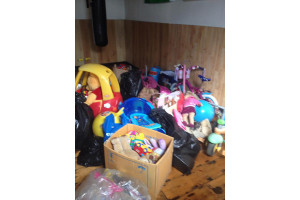 Just some of the toys collected yesterday within the first hour of a Syrian Refugee & Welcome-West Wicklow appeal[/caption]   Along with her two children Shania (15) and Zarrah (7), they hosted a collection yesterday in the Boxing Hall, Blessington and again, the generosity of the public was staggering. Carmel acknowledges Cllr Gerry O'Neill for facilitating them with the hall. "Within the first hour, we had received toys, bicycles, laptops, bubble cars and warm clothing for the Syrian children expected to arrive at the Hazel Hotel soon. Many people went out and bought new toys, and everything else was as new. Cllr Mark Wall came up and took a vanload of toys down to Jack Wall's constituency office in Athy, because we just wouldn't have room to store it! But for me, the warmth and generosity we've received far out-weighs the negativity, the 'We should look after our own' brigade" added Carmel Check out Syrian Support & Welcome Kildare, and the West Wicklow sites on Facebook. Carmel has agreed a 'shoe drive' with transition students in Blessington Community College before Christmas and is currently organising another collection in the Imaal Hall, Dunlavin. Contact Carmel at 085 118 0182. Have you a collection organised or a community initiative organised in support of the Syrian refugees in your area? Send the details please via email to content@kildarenow.com
ADVERTISEMENT
Advertise with Us
ADVERTISEMENT
Advertise with Us