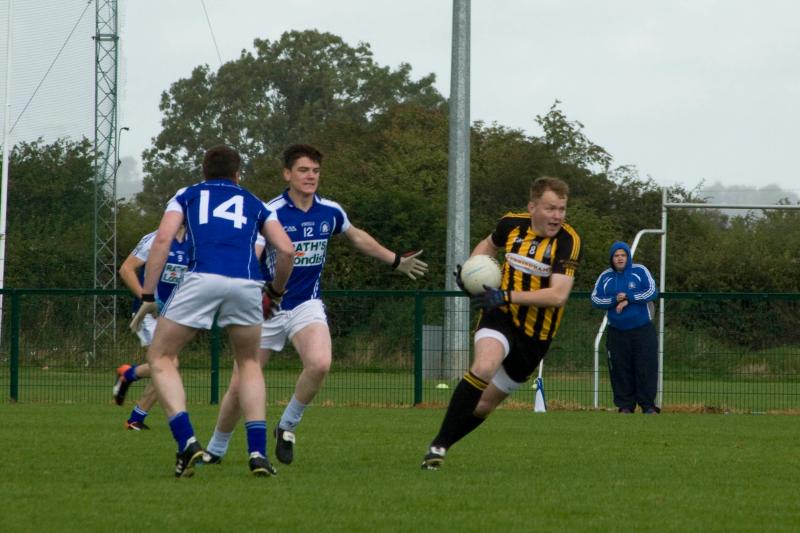 Castledermot       1-11 Round Towers     2-6 Joe Fox Plant Hire Intermediate quarter-final It was a game to prove that odds mean for little in the white heat of championship. Round Towers were the firm favourites to go on to claim the IFC title, but Castledermot produced a display full of grit and no little class to stifle their opponents and advance to this year’s semi-final stage. They were excellently led throughout by midfielder Gavin Farrell whose performance in the engine room excellently mirrored the performance of the team as a unit. He fired over three points, the last of which was the score that put Castledermot into the lead in injury time and pushed them over the line. The first half was a low-scoring affair with the half-time scores reading 1-3 to 0-6. Aaron McConville was the leading light in a stagnant Towers attack in the opening period, and it was he who got them off the mark with a lovely score on the turn from the right wing. Gavin Keating was impressive for Castledermot throughout, and he edged them into the lead with a fine long range free against the wind, before thumping a booming point over from 40 yards out. [caption id="attachment_42043" align="alignnone" width="1024"] 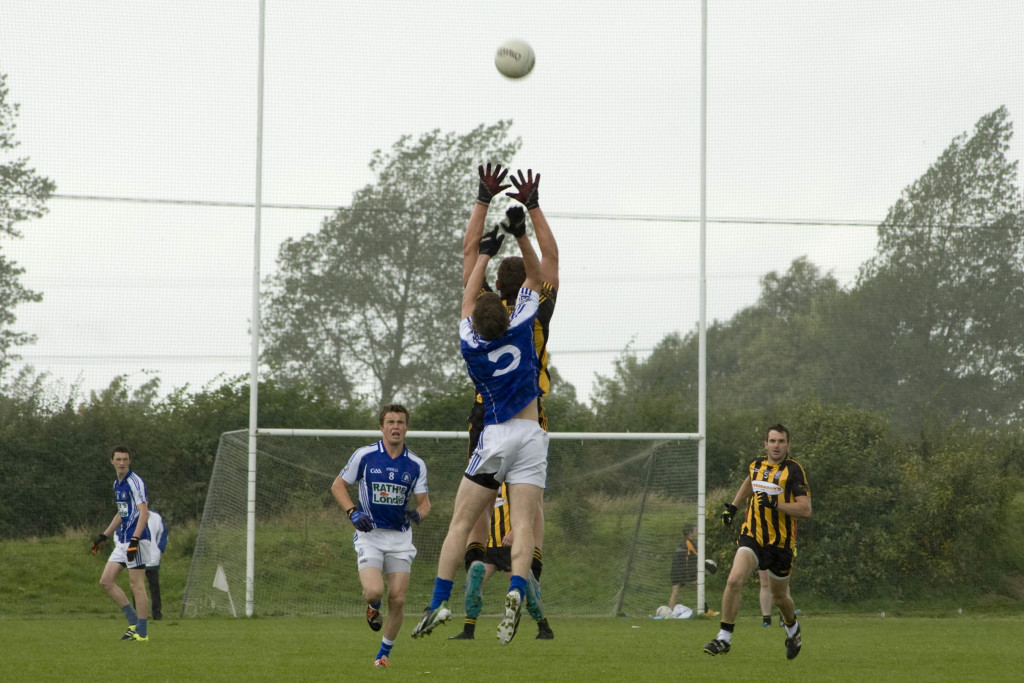 Castledermot's Barry Nolan and Round Towers Mark Waters compete in the air. Pat Tinsley photography.[/caption] Emmett O’Keefe than put two points between the sides with a fisted effort and Castledermot looked to have settled well. Round Towers retaliation was as impressive as it was instantaneous however, as they nabbed a goal that looked to be a major score in the game. Padraig Golden floated in a long ball over the Castledermot defence that found a completely unmarked McConville, who was ice cool as he finished into the bottom corner. Neil Scanlon added a free to put Towers into a two point lead. Points from Pauric Murphy, O’Keefe and Brian Nolan settled the blues back into the lead though, before Scanlon levelled the scores in first half stoppage time with a close range free. The rain eased off for the second half and there was plenty of slick football played after the break. It took almost 10 minutes for either side to get a score however, with Farrell eventually pointing. Half-time substitute Matthew Kelly had a big say in the second half, and he struck 1-1 in the space of two minutes to drive Towers back into a three point lead and they looked to have the momentum. Farrell settled his side once again though, kicking over a massive score from way out the field, before the game’s turning point came. Towers goalkeeper James Robinson took the ball out the pitch Shane Curran style, before losing it on his own 45’. The leather was working back into the Towers danger area, and in the ensuing chaos around the square the ball eventually fell to David Keating who fired into the net. https://www.youtube.com/watch?v=P2fq_Q9Z2qA Murphy and Kelly swapped frees, before another Kelly free tied the game up going into stoppage time. It looked destined to end in a draw, but an incisive Farrell run was picked out by O’Keefe and he belted the ball straight between the posts. https://www.youtube.com/watch?v=pn63D3UCiB0&feature=youtu.be Anthony Redmond settled the game’s outcome moments later with another score and Castledermot ran out two point victors. Castledermot scorers: G Farrell 0-3, D Keating 1-0, E O'Keefe, P Murphy(1f) and G Keating 0-2(1f) each, B Nolan and A Redmond 0-1 each. Castledermot P Murphy; T Murphy, L Cosgrove, B Kelly; B Nolan, P Murphy, D O'Keefe; G Farrell, B Nolan; G Hendy, P Whealan, O Doherty; D Keating, E O'Keefe, G Keating. Subs used: A Murphy and A Redmond Round Towers scorers: M Kelly 1-3(2f), A McConville 1-1, N Scanlon 0-2f. Round Towers J Robinson; M Kelly, N Fleming, J Flynn; P Cornish, M Scanlon, D O'Neill; D Houlihan, M Waters; M Byrne, J O'Brien, P Golden; N Scanlon, A McConville, A O'Brien. Subs used: M Joyce, M Kelly, E Flynn.
ADVERTISEMENT - CONTINUE READING BELOW