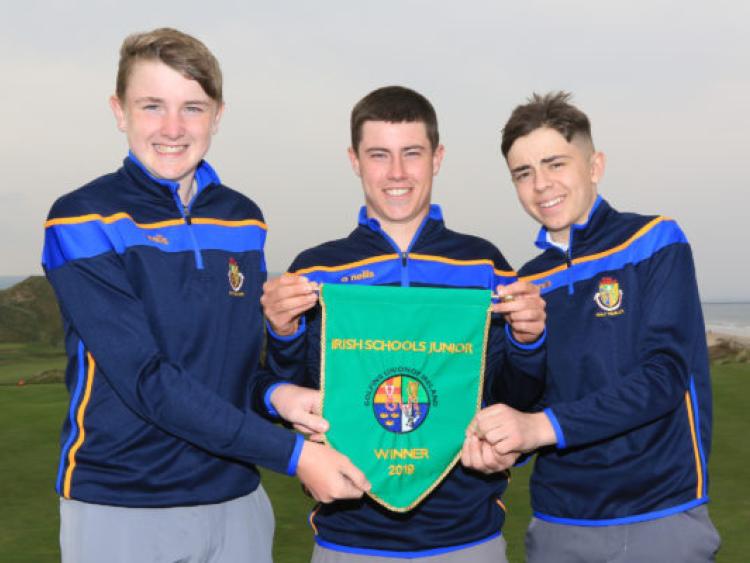 Congrats to Naas CBS who are now Irish Junior Schools Champions! It was a week to remember for the students of Naas CBS and of RBAI as they savoured All Ireland success at Portstewart.

In the Irish Schools Junior Final, decided on the stableford format, Naas CBS had two points to spare over St Colman's College. Andrew Curran led the way for the Naas school, with a superb total of 40 points, the best score of the day. Eoin Freeman was next best for Naas with 39 while Darragh Behan's score, 33, was not needed. Ciaran Rice was best for St Colman's, posting 39 points for the runners-up. 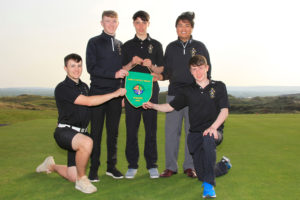 Team RBAI - Josh Robinson, Aaron Marshall, Luke Kelly, Marco Deane and Darcy Hogg winners of the Irish Schools Senior Championship (© Golffile | Thos Caffrey)[/caption] I  (Above) won the Irish Schools Senior Championship for the second time in five years when Josh Robinson claimed the decisive point in their 4-1 victory over Blackrock College. The Belfast boys took control of the final when Aaron Marshall (7&6) and Darcy Hogg (7&5) put points on the board. In the decisive contest, Josh Robinson went the distance against Robert Galligan, eventually prevailing with one hole to spare. Robinson went to the final hole needing a half to seal the winning point and when Galligan failed to convert his birdie putt, the RBAI student had two putts from close range to clinch the match. With Robinson's point in the bag, RBAI were champions again. Luke Kelly and Marco Deane played at number four and number five, respectively, for RBAI.   Feature photo, Naas Team: Darragh Behan, Eoin Freeman and Andrew Curran winners of the Irish Schools Junior Championship at Portstewart Golf Club, Co Antrim on Wednesday last. Photo : (© Golffile | Thos Caffrey)