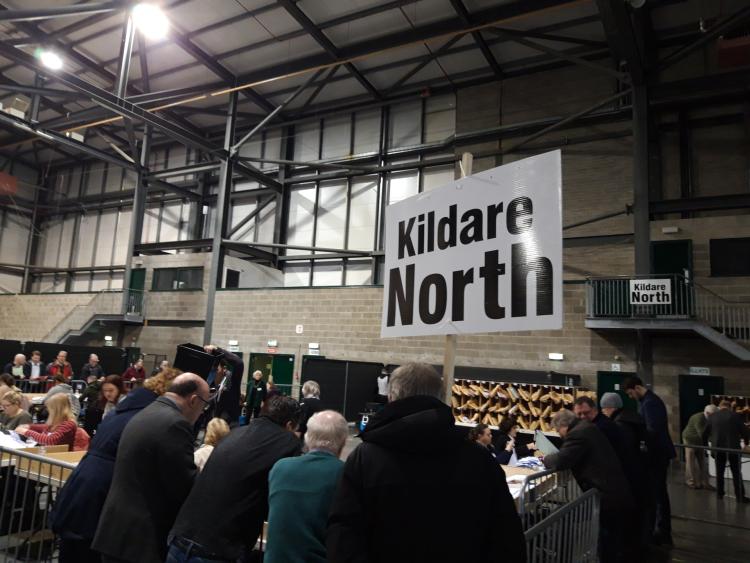 The count is ongoing at Punchestown Racecourse today

Tallies from the Kildare North and Kildare South general election count at Punchestown this afternoon indicate that there will be a fight for the last seat in each constituency.

James Lawless of Fianna Fáil looks likely to retain his seat in third position, leaving his fellow Fianna Fáil candidate and sitting TD Frank O'Rourke fighting it out with Fine Gael veteran Bernard Durkan for the last seat. Although O'Rourke is a good 1.4% ahead of Durkan, the fact that Fine Gael senator Anthony Lawlor is likely to be eliminated first may help push Durkan into fourth. The two Fine Gael candidates are transferring strongly between each other.

Fine Gael incumbent Martin Heydon looks likely to take a seat, as he was a couple of thousand of first preferences ahead of the third place runners in the tally. However, Heydon has no running mate to bump up his figures - so his best hope for transfers are from fellow Athy and surrounding areas candidates such as Mark Wall of Labour.

Transfers will also be crucial here in determining who gets the third seat. Sitting TD Fiona O'Loughlin, Wall and Independent Cathal Berry, who ran on an army welfare reform platform, are all be in the hunt here. O'Loughlin should pull transfers from her Fianna Fáil running mate Suzanne Doyle who will be eliminated first and may also benefit from Newbridge transfers from Cllr Fiona McLoughlin Healy, Ind, who polled well in the town.

Read also: KEEP UP TO DATE WITH KILDARE NORTH AND KILDARE COVERAGE ON OUR #GE2020 LIVE BLOG FROM PUNCHESTOWN