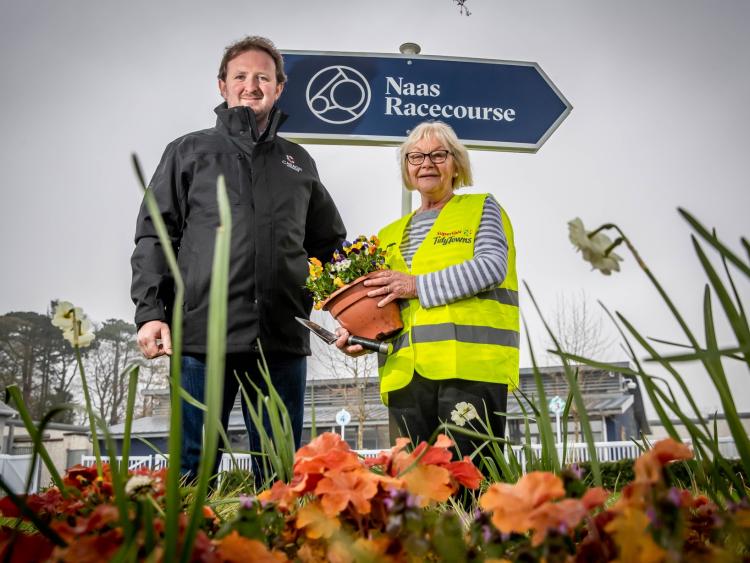 The competition is heating up both on and off the track at Naas Racecourse. The Kildare
track recently launched a new initiative which aims to encourage locals to embrace their local
racetrack and to connect with the local community in a meaningful way. To celebrate the
Naas Town Goes Racing meeting on Saturday 6th July, several ancillary events are taking
place off the track in Naas town.

Naas Racecourse, often referred to as the nursery of champions, has joined forces with Tidy
Towns and Caragh Nurseries in a bid to search for the tidiest estate in Naas! Residents
associations in Naas are being asked to put their best garden forward along with various other
elements to try and win a €500 voucher sponsored by the award winning Caragh Nurseries.
The voucher can be spent by the Residents Association to purchase everything from flora to
trees!

There are six categories up for grabs as part of the competition: best front garden, best street
within an estate, best entrance into an estate, best shop floral display and a biodiversity
award. To enter, take as many photos as you like and put the name of the estate at the back of
each photo along with the date and submit with a completed application form. Application
forms will be delivered to homes in Naas over the coming week and will be available to pick
up in Naas Public Library. Please hand the entry form back to Naas Public Library, the
Harbour (there will be an entry box located in the library) before 2nd July 2019. Entries can
also be e-mailed to naastidytowns@gmail.com.

Director of Caragh Nurseries, Jo McGarry said, “It is great to be part of a local community
initiative where people that encourages people to have sense of pride and joy in the place they
live. We are delighted to sponsor the search for the best estate and wish all the applicants the
best of luck”.

Also included in the ancillary of events taking place as part of Naas Town Goes Racing is an
art competition for 4 th, 5th and 6th class students. Students are being asked to take their
inspiration from the racing champions of tomorrow and draw a racehorse at Naas
Racecourse! The winning child will receive five complimentary admission tickets with lunch
in the restaurant for two adults and three children and a hamper of art supplies.

Plus, their
whole class with get a pair of complimentary tickets each to the races on the 6th of July. The
winner will also be presented with their prize on the day in the parade ring and the winning
piece of artwork will be reproduced in the race card at the ‘Naas Town Goes Racing’
meeting. Entries must be posted or delivered to Jackie Donohoe before the 7 th of June to Naas
Racecourse, Tipper Road, Naas, Co. Kildare.

The Naas Town Goes Racing Day will run on Saturday, the 6 th of July. The day itself will
feature top class racing and will include lots of activities for families and children including
face painting, novelty mascot characters, live music and a BBQ. Local traders are also invited
to reserve a pop-up unit at a significantly reduced rate at the track in order to promote their
business on the day. Each trader who books space will also be provided with 10
complimentary admission tickets, race card advertising and their brand will feature on the
large screens at the track.

For more details on the Naas Tidy Towns Competition sponsored by Caragh Nurseries, the
art competition or to book promotional space for the day contact Jackie Donohoe at Naas
Racecourse on (045) 897391. F