Urgent need for prefabs with delays in building new school 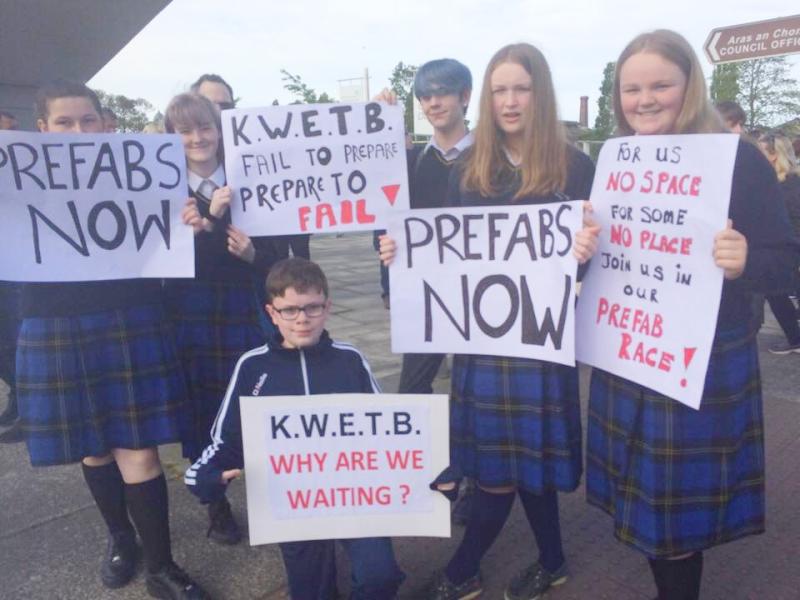 Naas second level students sharing a building with primary school children are again facing the daunting prospect of having nowhere to learn with serious uncertainty about whether they will have the required pre-fabs ready by September. Kildare West Wicklow Education and Training Board is being slammed by TD James Lawless, Board of Management for Naas Community School, for not applying for prefabs planning permission earlier, leaving children in limbo until at least October or December.

A protest was held by parents and pupils of Naas Community College outside the Kildare County Council building this morning. There are serious concerns that the 120 pupils due to be enrolled in September will not have room to be taught in the Craddockstown building.

There are currently six pre-fabs with plans revealed for another six,but concerns are mounting that the pre-fabs will not be ready for the children to learn within the grounds of Craddockstown School.

Parent Sean Kelleghan said: “There is not enough room to cater for the children. 120 children coming in this September, the question is why? It is a simple Maths problem.”

Ronan O'Reilly says that due to delays in delivering pre-fabs last year, problems could arise again.

He said: “The prefabs were delayed until December last year. We believed that the KWETB would deliver pre-fabs by August, we needed these by August.”

She also expressed fears that there may not be enough space for additional pre-fabs.

Deputy James Lawless anticipates that building will not in the Millenium Park school until 2021.