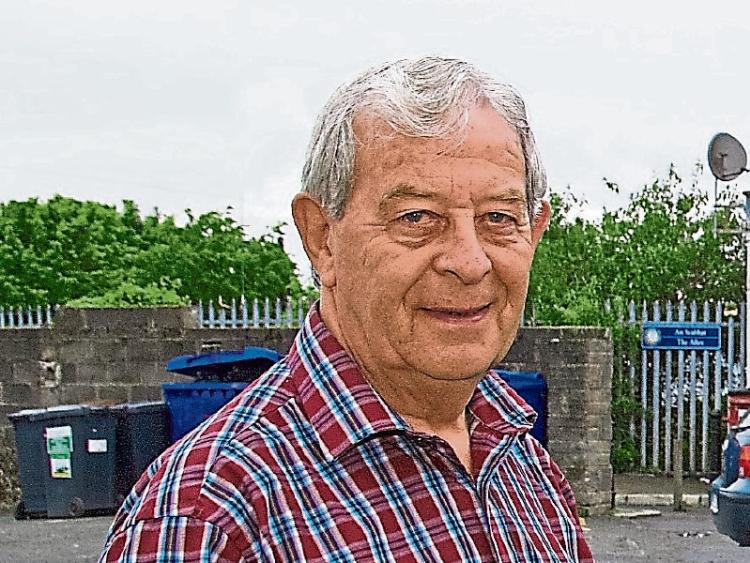 A long established Naas politician who celebrated his 80th birthday just weeks ago is now canvassing at the doors, in a bid to retain his position for another five years.

Holding a positive outlook for the future of Naas town,he admits that modernisation is resulting in a move away from the traditional, local structure of Naas,and that the consequence of more houses being built and less employment in the town is the current 7,500 residents of Naas going to Dublin for employment.

Cllr Moore said: “We have not been able to offer them employment.This shows the Dublin influence in the economy.”

He voices some concern that there is still 150 acres of vacant land at the Millenium Park in Naas, but is hopeful that companies will soon look towards moving to the sites there.

Cllr Moore recalls a Naas in the 1950s when there were 25 pubs in the town, and in the nineties, most households had just one car.

Now most families in Naas, have two cars, says Cllr Moore, and more are prepared to travel for work.

However, purchasing a house in Naas is now extremely expensive and Cllr Moore is hopeful there will be a move towards more affordable housing.

Within his next term, if elected, he would like to see to a 'concentrated effort' to make Naas a regional shopping area. Pointing out that a large proportion of landlords own businesses in Naas, but don't run them, he would like to see a joining up of groups, with a specialised marketing manager for the town, in a bid to promote the town further.

Disappointed that Naas Shopping Centre remains closed, he is confident that the shopping centre, which can cater for about 800 car parking spaces, will be fully open within two years.

Meanwhile, Cllr Moore says that one of the major issues now facing him at the doors is the concerns surrounding the Naas Inner Relief Road.

Despite a vote on the Naas Inner Relief Road due to go ahead on either May 12 or 14, the vote by Cllrs will now take place after the election on May 24.Voting could even be pushed out as far as this July.

Essentially, the Inner Relief Road is being constructed to allow for the development of more housing. €4.6million is being allocated for the Relief Road, concerns are being voiced that if an route is not chosen, then the money will be lost.

Kildare Co Council has expressed its strong support for the proposed Naas Inner Relief Road saying it will bring "important and necessary improvements to the town and the local community."Route 2 runs close to hundreds of homes as it cuts from the Dublin Road to the Blessington Road along the edge of the grounds of Naas Racecourse.Population areas to be affected by the route include Mountain View, Sunday's Well, The Paddocks, Elmwood, Woodlands, Kingsfurze, Kings Court, The Gallops and Racecourse Gate, as well as areas of Monread and Tipper Road.Cllr Moore says he will oppose the Naas Inner Relief Road as it is out of date.Meanwhile, other issues meeting Cllr Moore at the doorsteps include a need for a new secondary school at Millenium Park and a shortage of creche places for parents around Naas.