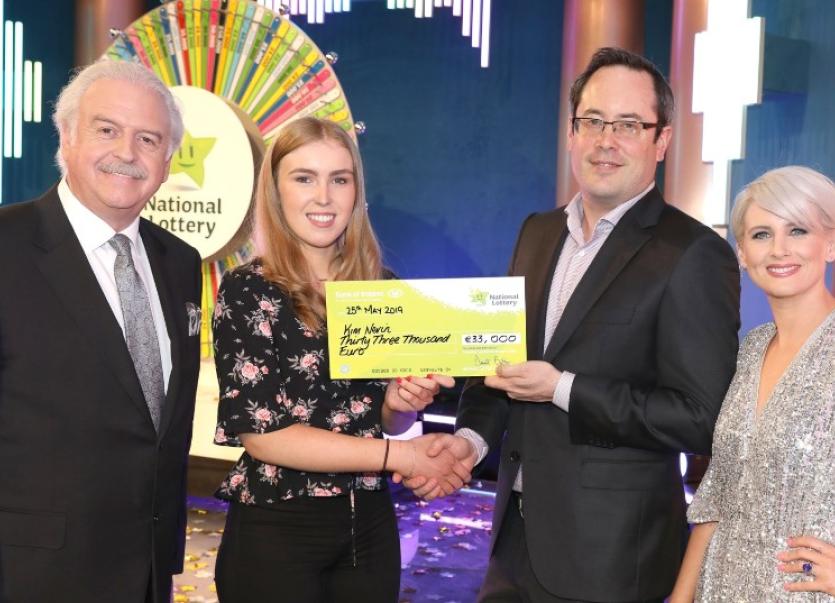 A student from Co. Kildare won a cool €33,000 when she appeared on the National Lottery TV game show last Saturday.

She spoke of getting the shock of her life when she received a text message two Thursday evening’s ago to ask was it her name that got pulled out for the last Winning Streak show of the season.

Kim wasn’t aware of this good news but had been mindful that, since she turned 18 years old this February, her grandmother, Breda, had started putting Kim’s name on any Winning Streak scratch card which got three stars when she posted it into the National Lottery. After a quick call to her gran, it was confirmed that Kim was going to take to the Winning Streak stage.

Kim is apparently the lucky one in the family – that’s according to her grandfather who claims that whenever Kim goes to watch a Kildare football game, they win!

Kim will commence a course in beauty therapy in September and she has a career in this field firmly in her vision.

She also hopes to own her own business one day. Kim has been working part time in Alainn salon in Maynooth for the past two years.

Supporting Kim on Saturday were her mum and dad, Vivienne and Hugh as well as her brother Adam.

Of course her grandmother Breda was in the audience, whose ticket got Kim on the show. She will also be cheered on by a number of other friends and family members.

She has no plans for her €33,000 winnings from the show but will definitely treat her grandmother Breda to something special.

This was the final Winning Streak National Lottery game show of the current season.