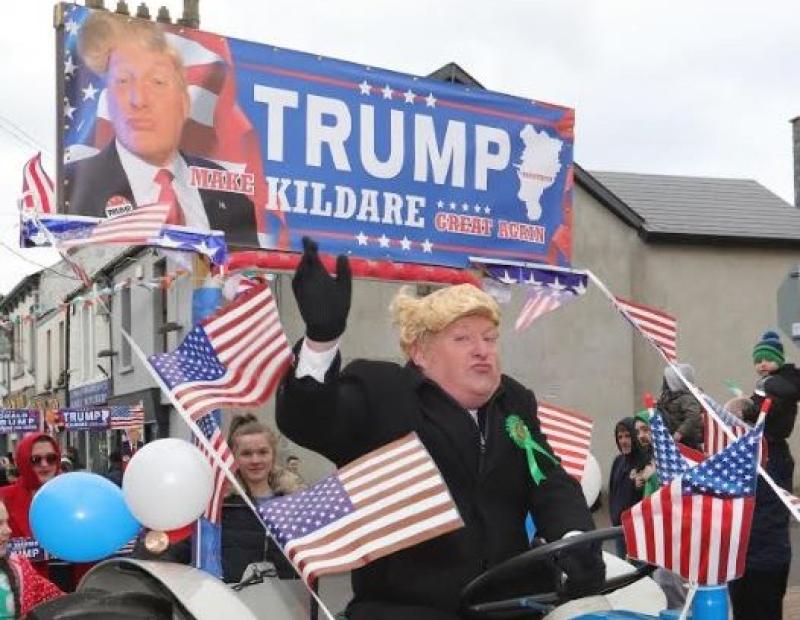 US president Donald Trump has been invited to stop-over in Monasterevin during his visit to Ireland next week.

The invitation has come from local man Mick Brennan who regularly dresses up as Trump for charity events in his local community.

For the past three years, he has transformed himself into the US president driving a vintage tractor for the St Patrick’s Day Parade in Monasterevin. 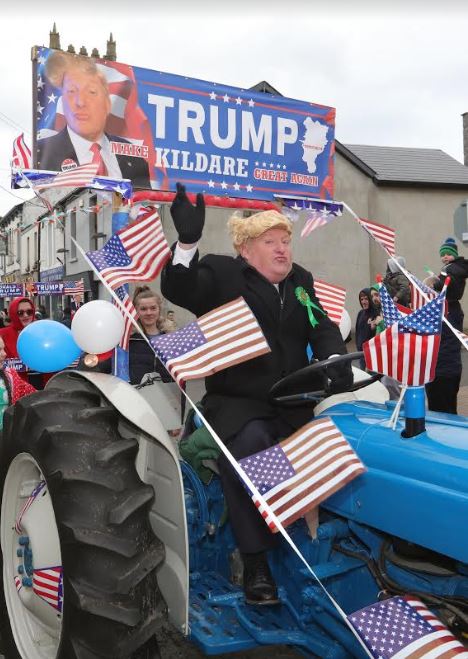 He even received a prize this year for the quality of of his float which featured US flags and the sign: ‘Make Kildare Great Again!’

Mick also takes part in charity tractor runs with his 1962 Fordson Dexta in character as Trump.

US President Donald Trump is to visit Ireland on Wednesday of next week, the White House has confirmed, and Taoiseach Leo Varadkar and Mr Trump will hold a bilateral meeting in Shannon when he arrives.

However Mick has invited Trump to make time in his presidential schedule to come to Monasterevin and to take a spin on his Fordson tractor.

Mick told the Kildare Post: “It all started as a bit of fun dressing up as Trump and now people ask me to come to events dressed as him.

“I’m not into politics or anything, I just do it for fun.”

Mick, who has seven children and 15 grandchildren, added that the presidential cavalcade would have positive spin-offs for Monasterevin.

“If there was any presidential visit to Monasterevin, it would be great for the town.”

“He could have a spin on the tractor as well!” Mick suggested.

The retired stud worker, who is a singer in his spare time, also extended a Céad Míle Fáilte to the First Lady. He said: “Melania would be very welcome as well.”

Mr Trump is in Europe for a state visit to the United Kingdom and for events in the UK and France to commemorate the 75th anniversary of D-Day.

While in Ireland. Trump is expected to be based at his golf resort in Doonbeg, Co Clare.

Traffic restrictions, road closures and a no-fly zone is expected to be put into place.

Mick had various jobs before he retired several years ago.

He worked in the former Black & Decker tools plant in Kildare Town as well as a stud farm in Portarlington.

He has an interest in vintage machinery and helped restore his beloved Fordson Dexta with the help of a pal.

He also has a love for Honda 50 motorbikes.