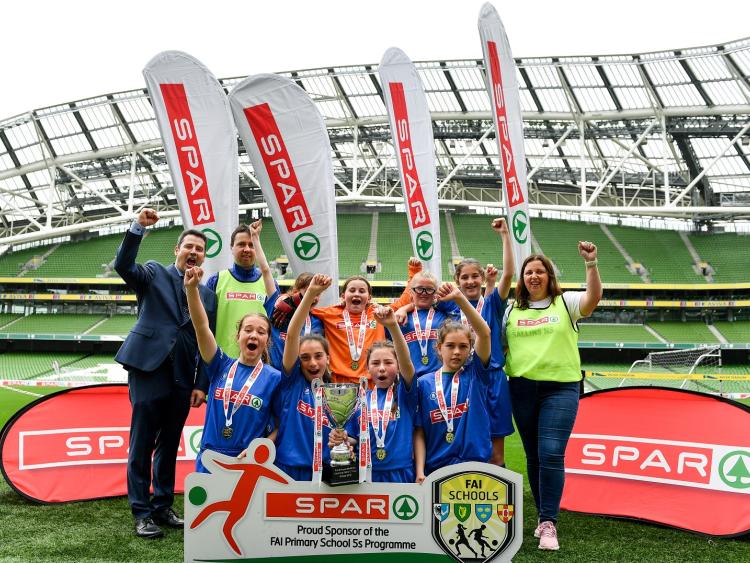 Students from St. Laurence’s National School in Sallins, battled all the way to a National Title in the SPAR FAI Primary School 5s Programme National Finals which took place in Aviva Stadium, Dublin on Wednesday, May 29.

A total of 192 children, representing 24 schools and 13 counties qualified for the finals and had the opportunity to take to the pitch in Aviva Stadium, the home of Irish Football. Fourth, fifth and sixth class primary school students from Donegal, Cork, Kildare, Galway, Offaly, Monaghan, Kerry, Limerick, Wicklow, Clare, Wexford, Roscommon and Sligo all walked through the tunnel, in the footsteps of their heroes, to a carnival atmosphere at the National Finals, cheered and supported by thousands of friends and family who made the trip.

A record 37,448 participants from 1,696 schools started out in blitzes held nationwide building on the success of last year and continuing the incredible grassroots growth of the programme, supported by SPAR’s network of local retailers. Participation in the programme has increased by 96% since 2015 making it the largest programme of its kind in Ireland. Once again, the number of girls involved increased with 15,640 taking to football pitches across Ireland, making it a truly inclusive programme. Irish International, Megan Campbell, has helped to inspire the next generation through her role as a SPAR5s ambassador throughout the year.

Colin Donnelly, SPAR Sales Director, said: “We have been supporting the SPAR FAI Primary School 5s Programme for five years and are very proud of the continued growth of the programme as we help give more school children the opportunity to enjoy the benefits of physical activity and a healthy lifestyle. Our network of local retailers has been supporting pitch side in communities all over Ireland throughout the county, regional and provincial stages of the programme which has seen a record 37,448 boys and girls from 1,696 schools participating.Finally, I’d like to offer huge congratulations to all the schools who competed in the National Finals and thank you to all the family, friends and supporters for making the day so special.”

Dave Archbold, Secretary of FAI Schools said: “FAI Schools are delighted with SPAR’s continued sponsorship of this programme. We must pay tribute to the phenomenal work carried out at grassroots level by the Provincial Co-ordinators and Regional Development Officers in ensuring that the event is even more popular than ever before. We are thrilled with the participation numbers this season and thank all the schools for their involvement in 2019”.