Irish Rail issues warning after more than 50 incidents at Level Crossings so far in 2019 - including in Kildare! 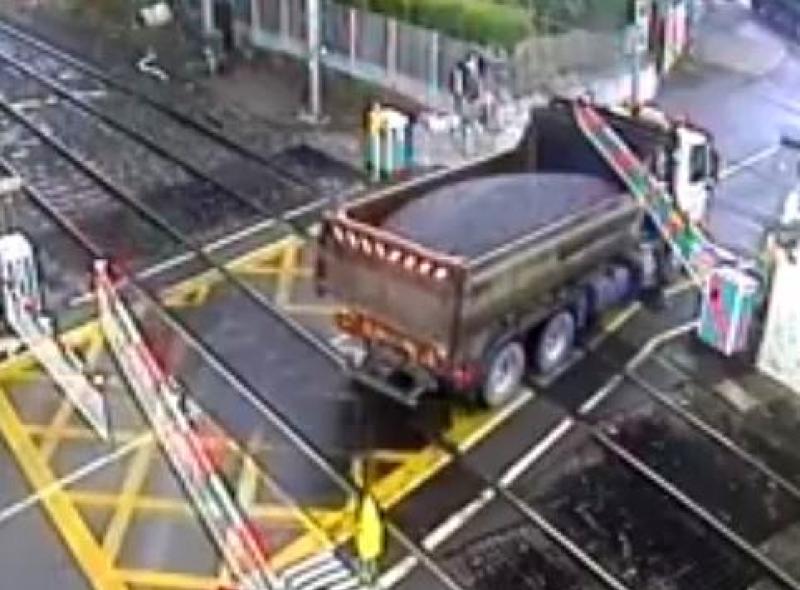 Lorry at Level Crossing at Claremount in Dublin

On International Level Crossing Awareness Day (ILCAD), Iarnród Éireann has called for greater vigilance by those who use railway level crossings, whether in urban or rural environments, as incidents so far this year have surged by 82%.

In 2018 there were 81 incidents at level crossings, the majority of which were level crossing barriers being struck by vehicles which continued over the level crossing, even though the barriers were lowering and the warning lights were flashing.

These incidents can cause significant disruption to rail services, and also place both the road user and railway users at serious risk.

However, there has been a significant growth in incidents recorded so far this year, with 51 incidents at level crossings across the network, an 82% increase on the same period last year, which is extremely worrying.

One incident happened during an afternoon at Barberstown, near Straffan only  two weeks ago.

Other level crossings that have been regularly struck include Serpentine Avenue, Sydney Parade and Lansdowne Road.

All of these are equipped with licence plate recognition systems to assist in prosecutions of offenders.

International Level Crossing Awareness Day (ILCAD) is a UIC (International Railway Union) initiative to encourage members of the public to be vigilant when using level crossings to cross the railway.

There are currently 948 level crossings on the Iarnród Éireann network.

These are a combination of automated CCTV crossings, manned crossing and unmanned user operated accommodation crossings.

As part of our network wide Level crossing elimination programme, Iarnród Éireann is working to eliminate as many level crossings as practicable.

Iarnród Éireann is currently in advanced stages of securing approval from the Commission for Rail Regulation (CRR) for a new technological safety solution at a number of user-operated level crossings.

The system involves a type of traffic light system, to warn users when there is a train approaching.

The first crossings will have the technology in place by the end of this year.

However, the company reminds users of the onus to use crossings responsibly:

Level crossing accidents account for 1.2% of road deaths in Europe but 29% of all rail fatalities.

Although Ireland’s record is far stronger than the European average, and there have been no level crossing fatalities since 2010, vigilance is essential and Iarnród Éireann are bringing the message of International Level Crossing Awareness Day to Irish crossing users. The theme for this year is ‘The most important stop of the day’.