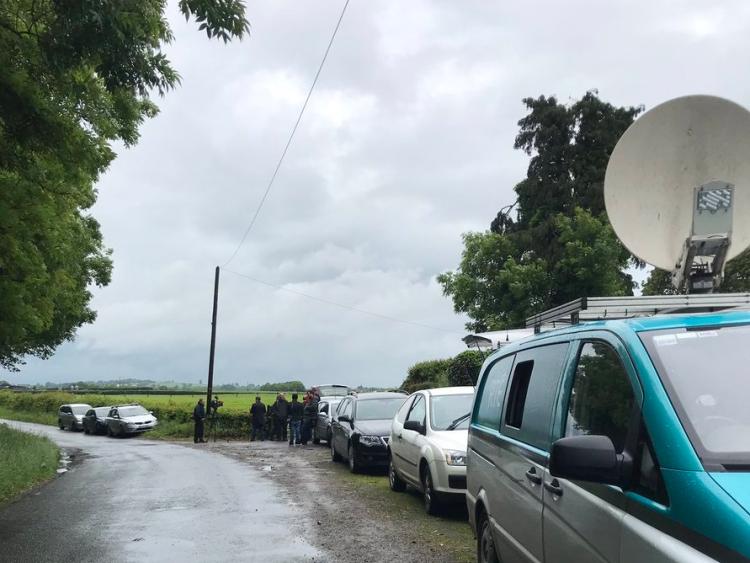 The countryside near the scene of the crash

Locals living in the rural area of Belan in Moone heard the search and rescue helicopter at around 4am this morning but didn't realise until day dawned that two men had died nearby in a tragic air crash.

The crash site itself is well in off the public road, two fields beyond a lane way which leads to a private farmyard.

One local man said the helicopter had woken him up around 4am. He was shocked to learn the reason for their presence later on this morning.

Another neighbour said he had heard the plane had taken off from Kilrush airfield before it crashed a short time later.

"Our thoughts are with the family and we are mindful of the tragic situation," said another local resident.

Evelyn Kavanagh of Greese View House, Evelyn lives about three quarters of a mile from the crash site, in a quiet, rural area near Junction 3.

“At about 4.30am a helicopter was circling over the garage of my house," she said.

Ms Kavanagh said that she got a call from a friend at about 11am this morning to tell her that a plane had crashed at Belan.

She also offered her sympathies to the families involved.

News of the crash was only emerging as the morning progressed with several media outlets arriving at the rural County Kildare scene. Gardai have sealed off the site so the crash site investigators can carry out their investigation.

Kildare Superintendant Martin Walker is due to give a briefing at the scene at 2pm.

Cllr Ivan Keatley said he had heard one of the deceased men may have been an instructor and one may have had links to Kildare town.

Live from the scene of the tragic light aircraft accident where two men sadly lost their lives one is believed to be from Kildare town pic.twitter.com/fCUiRubHxU