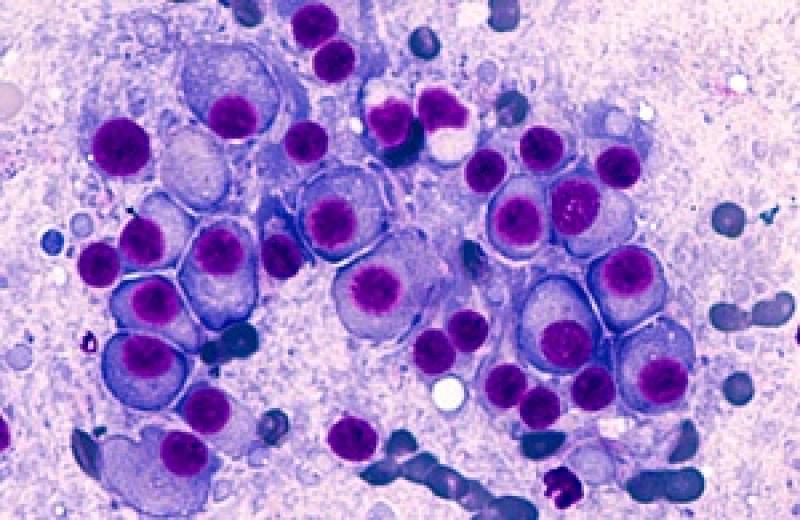 Blood Cancer Network Ireland (BCNI) which is led by Professor Michael O’Dwyer in NUI Galway, has completed the first Phase I clinical trial study in Ireland on patients newly diagnosed with Multiple Myeloma. The trial has shown very promising results in the patients’ response to the new treatment with the findings published yesterday in the scientific journal, Blood Advances.

Multiple Myeloma is a blood cancer arising from a type of white blood cell called a plasma cell. Plasma cells normally produce antibodies which help fight infection. In Multiple Myeloma the plasma cells become cancerous and are called myeloma cells. Myeloma impairs the production of red blood cells leading to anaemia, as well as causing damage to the bones and kidneys. Each year in Ireland approximately 250 people are diagnosed with the cancer and 170 succumb to the disease.

Irish patients with Multiple Myeloma were the first patients worldwide to take part in the drug trial to develop a more effective treatment for this cancer. The innovative BCNI Phase I clinical trial investigated whether the addition of a new Multiple Myeloma treatment, Daratumumab (DARA), to a standard care chemotherapy containing the drugs Cyclophosphamide and Bortezomib (CyBorD), is beneficial for treating newly diagnosed patients. DARA by itself is a very promising new therapy for this particular cancer and has been approved for treating relapsed patients. This is the first study in the world to combine DARA with Cyclophosphamide, specifically as a treatment for younger patients undergoing a  subsequent stem cell transplant, to determine whether this combination results in a more effective treatment.

The study demonstrates that the addition of DARA to CyBorD is very beneficial and well tolerated by patients. It found that 17/18 patients achieved a very good response to the therapy and over 50% of all patients achieved excellent responses, with no evidence of minimal residual disease (MRD) using sensitive genetic testing.

The investigators also went on to show that the reason for the excellent results was that the combination of the two treatments activated the immune system, increasing its ability to kill the cancer cells. The success of this early Phase I trial suggests this combination of treatments should be further evaluated for the treatment of patients who are newly diagnosed with multiple myeloma.

Professor Michael O’ Dwyer, Director of BCNI and Professor of Haematology at NUI Galway, commented: “These results justify the faith and investment placed in Blood Cancer Network Ireland investigators by Science Foundation Ireland and the Irish Cancer Society and the critical funding and support provided by Janssen, without which this trial would not have been possible."

He said:“This new regimen, which is highly effective, safe and convenient has the potential to become an important new treatment option for patients with Multiple Myeloma. A European trial, which will include Irish patients, hopes to confirm the superiority of this treatment over current standard treatment, and will be launched shortly. This trial exemplifies the importance of good bench to bedside research and shows that high quality clinical and translational research can be conducted in Ireland with the provision of adequate funding.”

Co-author of the study, Dr Aideen Ryan, Lecturer and Researcher in Tumour Immunology at NUI Galway, said: “This BCNI led study has been a great opportunity to integrate our immunology expertise with clinical trial data to understand how these new drug combinations may enhance anti-tumour immune responses in patients with multiple myeloma.”

This clinical trial is the first homegrown (investigator initiated) trial to be conducted by Blood Cancer Network Ireland. It is the culmination of collaborative research efforts between BCNI scientists and Janssen pharmaceuticals and it represents a bench to bedside approach where scientific insights from the laboratory are applied to developing new and improved ways to treat patients. Notably Irish patients on this trial received access to DARA which would not have been possible without this trial and it saved the taxpayer approximately €4 million in drug costs.

Dr Robert O’Connor, Head of Cancer Research at the Irish Cancer Society, commented: “The Irish Cancer Society is proud to be partnering with Science Foundation Ireland on the funding of BCNI, ensuring that Irish blood cancer patients benefit from the latest advances in cancer care and treatment. These latest findings highlight the importance of investing in world class innovative cancer research in Ireland. We’re truly grateful for the generous public donations without which we couldn’t make such strategic investments and we thank the patients who have taken part and contributed to research like this which has huge potential to significantly improve the lives of future cancer patients.”

Professor Mark Ferguson, Director General of Science Foundation Ireland and Chief Scientific Adviser to the Government of Ireland, said: “Science Foundation Ireland is pleased to have supported the research behind this novel treatment for patients with Multiple Myeloma. It is a good example of how research collaborations between scientists, physicians, patients and companies can lead to positive outcomes resulting in better treatment options for patients. Blood Cancer Network Ireland is a collaborative funding partnership between SFI, the Irish Cancer Society, and a number of pharmaceutical companies. This promising research result demonstrates the impact of this collaborative approach spanning the full range of excellent, basic and applied research. I congratulate the team and I look forward to further future advances.”