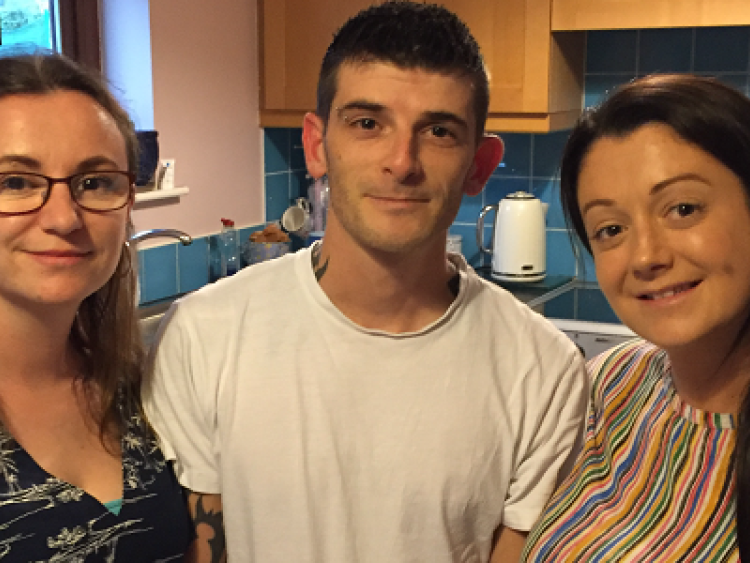 Amy, Robbie and Koaleen Booth from left to right

A Co Kildare woman whose parents were homeless is part of a local group planning to parachute jump from a plane in a bid to raise funds for a charity providing food to the homeless and needy in Newbridge.

Koaleen Booth, is joining her sister Amy and brother Robbie, along with 13 others to parachute jump out of a plane from a height of 10,000 ft at Clombalogue on Saturday, August 10.

The group are raising funds for a new gazebo and folding tables for the people who avail of the meals from The Dining Room in Newbridge, every Wednesday and Friday evening.

Ms Booth, a mother of two boys, is concerned about rising levels of homelessness throughout the county.

Her father worked as an Army Ranger at The Curragh, where they resided, but moved to England with her mother and siblings, when her parents separated. When she was about 14, and had returned to Co Kildare, both of her parents were homeless, and her eldest sister, 24 years old, at the time, rented a house in Newbridge and took care of herself and her four siblings, of whom the youngest was nine.

She said: “I think that the homeless situation in Newbridge is dire, the rents are  too high. I was lucky although my parents were homeless, I was never in emergency accommodation, my sister took us in, I have great uncles and aunts,our family supported us.”

Ms Booth says as a teenager, having parents who were homeless was embarrassing.

She said: “I feel sorry for them now, they did not know where to turn.”

Both of Koaleen's parents had a drink problem, her mother died from pneumonia in 2002, when she was 18. In 2007, her father died from a heart condition. Both of her parents were just 50 years old when they passed away.

Currently on a career break as a hairdresser, raising her sons, six and 12, she volunteers at The Dining Room, Newbridge, and has been for over two years. She also cuts hair voluntarily once a month for those attending the services of The Dining Room. Her sons assist her in preparing food twice a week for those in need.

She said: “We see all sorts of different people, people living rough, people living in emergency accommodation and people living in homes who are struggling . We also give out items such as baby wipes, toothbrushs, warm clothes during the winter, and family bags to people who have cooking facilities.”

Homeless charity Focus Ireland reveals that Co Kildare has the highest amount of homeless adults in the midlands, with 170 listed as homeless. Official figures reveal that there are currently 3,962 households on social housing waiting lists in Co Kildare.

59 people are homeless in Co Offaly while there are 657 people waiting on social housing.

There are 16 parachute jumpers booked in for the event raising funds for The Dining Room, Newbridge, on Saturday, August 10, and they are busy collecting sponsorship from family and friends.
After the parachute jump a party is planned at Judge Roy Beans where the cheque will be handed over. Each parachute jumper hopes to raise €500 each, with an aim to raise a total of up to €6,000.  This service is available to the homeless, those in emergency accommodation and those struggling in their own homes.

The Dining Room offers food every Wednesday and Friday from 7.45pm to 10pm.