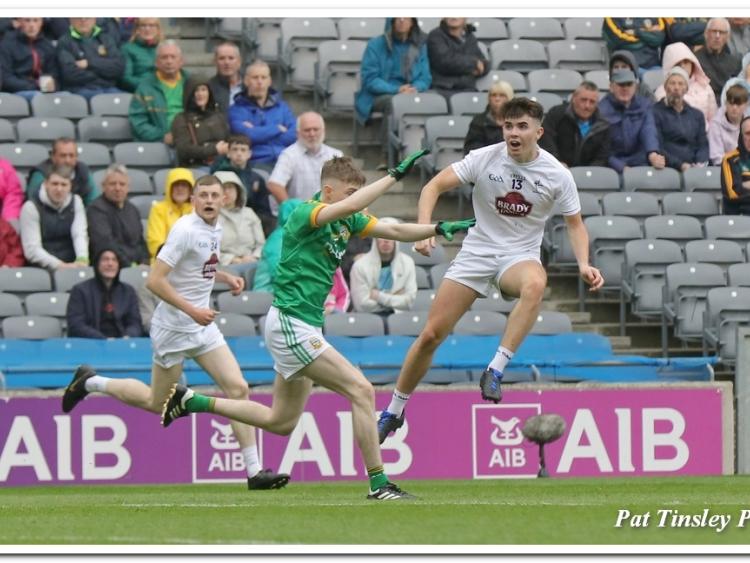 Jack Robinson slots over a point, one of his seven scores this afternoon in the Leinster JFC final. Photo Pat Tinsley

Kildare’s hopes of landing back-to-back Leinster Junior Titles fell away as Meath sealed a two point win in Croke Park this afternoon. First half goals from Ruairi O’Coileain and Kevin Ross proved to be royal killer blows for Kildare although they did fight back resiliently.

For three quarters of the contest, Meath were in command but 9 points in the last quarter got Kildare within touching distance but alas, they couldn’t quite force a late equaliser. Unsurprisingly, Jack Robinson and Padraig Nash were the leading lights once more for Kildare but the influx from the bench had a big impact in turning the tide even if they did just fall up short.

In a sparsely attended Croke Park, it was Kildare who got the ideal start as Niall Murphy set up Eoghan Lawless for an opening minute score. Meath responded with a 45 from Frank O’Reilly and late entrant to the team Ruairi O’Coileain almost found the net when a driven shot was blocked on the line.

Mark Grace then put Kildare back in front but quickfire scores from O’Coileain and James Cassidy soon overturned the deficit in the Royals favour. Jack Robinson was the star in Kildare’s semi-final victory over Longford but the elusive Clogherinkoe starlet had a mixed opening period. His shot on goal was saved by Adam McDermott but he did split the posts moments after that miss.

Meath looked a considerable threat up front though and after Danny Quinn kicked a point in the 8th minute to edge them 0-4 to 0-3 clear, Kildare stopper Tom Kinsella had to be at his best to deny Sean Reilly.

The Meath goals didn’t take long to arrive, however, and two came within minutes of each other as both O’Coileain and Kevin Ross got behind the Kildare rearguard to blast shots to the net. Kildare responded with points from Robinson, Padraig Nash and Daniel Grehan before O’Reilly and Jason Scully increased Meath’s lead further as they pushed ahead.

Points from Nash and Robinson reduced the gap to six before the break but Kildare still had a big task as they went into the dressing rooms. Two Robinson points at the start of the second period looked like it would get Kildare into vogue but it was a real slow burner with Meath responding as Scully kicked his third point.

Kildare got close to the Royals on many occasions but every time inched nearer, Davy Nelson’s outfit kicked on and they looked like they had the game wrapped up by the 44th minute with consecutive scores from Ross, O’Coileain and O’Reilly giving them a 2-11 to 0-9 advantage.

Meath struggled throughout the last quarter though and with the introduction of the evergreen Johnny Doyle, Kildare rallied valiantly. Either side of a Stephen Coogan score, Robinson, Nash and subs Barry Noone and Shane O’Rourke found the target as Kildare somehow got back within two points entering the last five minutes.

Kevin Ross looked like he settled Meath with a point but again, Kildare came back with Robinson and Nash scoring to leave just the minimum between the sides.

Kildare had a chance to go level in stoppage time when Nash stood over a free near the sideline but instead of shooting he went short and Meath broke the attack up as they went downfield with an O’Reilly free sealing the provincial crown for the team in green and gold.