First time Ireland has ever qualified for the competition 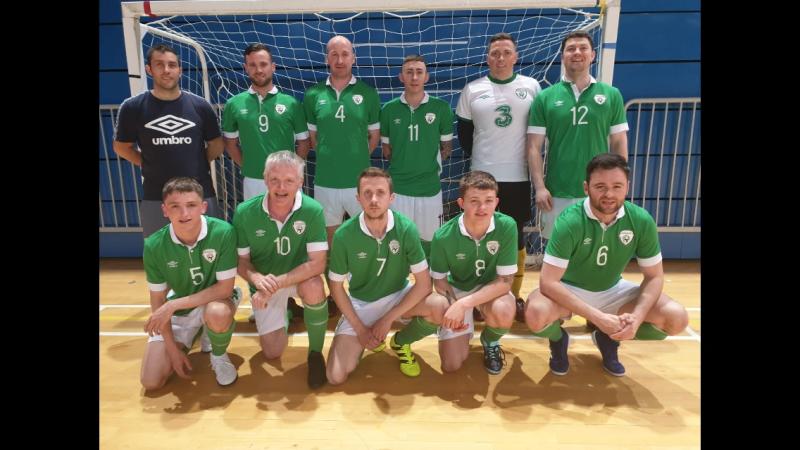 A Co Kildare man is one of 10 players, all living with diabetes, who will be travelling to Ukraine on July 21 to represent their country at the 2019 “Diabetes Euro Futsal” Championship.

The championship, which began after the last UEFA European Championship, is a 16-team tournament with teams competing from all over Europe with the Republic of Ireland having a team in the Championship for the first time. Futsal is a variant of association football played on a hard court indoors, and can be considered a version of five-a-side football played with a smaller, harder, low-bounce ball at a high intensity using unlimited substitutes.

Representing their country will be players from 7 different counties who came through a series of trials which saw over 40 players attending and Celbridge man Robert Treacy (44) is one of the most experienced players on the team.

Speaking to KildareNow, Robert explained how he was diagnosed with Type 2 diabetes two years ago. “I played football my whole life right up until I was diagnosed with Type 2 diabetes two years ago and I couldn’t keep up with playing football for a while, then I saw the ad on Facebook looking for men to join the national team to play ‘Futsal’ which is a lot like football except played on an indoor court. I signed up for it and the idea for the national team was organised by Cathal Fleming (who is the goalie) who approached Diabetes Ireland about it, and now 10 of us are flying out to Ukraine for the Championship next month,” he said.

Robert explained that this is first year that a team from Ireland has qualified for the Euro Championship with at least 16 countries from around Europe taking part in the competition.

“There’s at least 16 teams and the competition will run for six days, we are set to arrive on the Sunday with our first match on that same day and we’ve got a match to play almost every day. We started off training once a month then every two weeks, now we’re training every week because with Futsal it’s about the tactics because it is fairly different to associated football in that regard, and also because we have to watch out for our diabetes when we play on the court,” he said.

Describing his daily battle against diabetes, Robert said: “It is hard to live with it, you have to make a conscious choice to live by the rules and it’s a complete lifestyle change when you have diabetes because it can be life-threatening. A couple of members on the squad have had close calls with their diabetes. I had given up on playing football after my diagnosis, but when I started playing Futsal, I turned over a new leaf and I’m delighted to be on the squad.”

Robert and his team-mates are hopeful that their participation in the Futsal Euro Championships will show people with diabetes that they ‘can still do the sports and activities they love so long as they educate themselves’ on their condition.

“We know the competition will be tough as many of the other teams will have more experience than us but we’re going to give it our best,” added Robert.

He also wanted to thank local businesses in Celbridge such as Michelangelo’s restaurant, The Village Inn, The Duck, Delhi Darbar, Walsh’s Pharmacy, Conway’s Butchers, Halo café, Demario’s Pizza, Carry Out Off Licence, Shine Hairdressers, Nigel’s Barbershop and Purple Monkey Gadgets who have helped him by donating prizes for a raffle at Celbridge AFC that raised €800 and Cartel.ie also donated €300 to Robert’s fundraising efforts for the Irish team.

Meanwhile, the team have also launched a fundraising campaign to pay for travel and accommodation.

Kieran O’Leary, CEO of Diabetes Ireland said; “This is a fantastic opportunity for the lads and is something we want to build on year on year and see more young people with diabetes getting an opportunity to represent their country at this tournament. The greatest challenge for the lads will be coping with the stifling heat and humidity and managing their blood glucose levels effectively so they remain fully prepared for each game.”

To make a donation to the team fund, please visit www.give.everydayhero.com