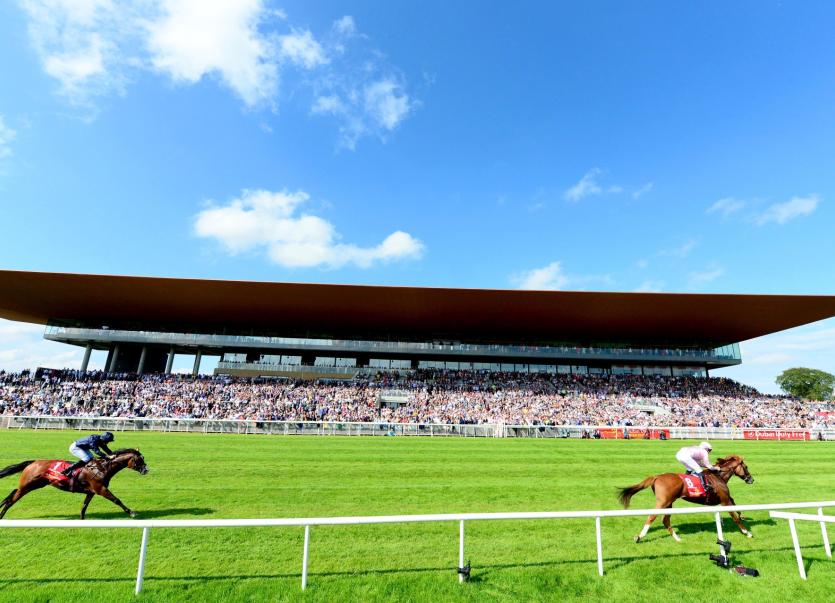 The 12th Dubai Duty Free Irish Derby at the Curragh saw the Aidan O’Brien trained ‘Sovereign’ going first past the post in the confident hands of jockey, Padraig Beggy.

The Dubai Duty Free Irish Derby is the feature event of the festival of high-octane racing, with the best horses, jockeys and trainers in the world taking each other on in front of an enthralled audience revelling in supreme hospitality.

The festival and day, which is sponsored by the world’s leading airport retailer Dubai Duty Free, was a great success filled with fantastic racing, fashion and fun.

Speaking at the press conference after the exciting Dubai Duty Free Irish Derby took place, Executive Vice Chairman and CEO of Dubai Duty Free, Colm McLoughlin said, “I would like to offer my huge congratulations to the winning connections and also to compliment The Curragh Racecourse on the wonderful new facility.

“The development is very impressive, this is the 12th Dubai Duty Free Irish Derby, however we have been involved with the Curragh since 2002.

”We are delighted to be the title sponsor of this prestigious race and thoroughly enjoyed the action and excitement of the festival.”

The Most Stylish Person Competition was also sponsored by Dubai Duty Free.

Moira wore an apple green dress with matching hat, which she made herself.

The 1950’s inspired dress was from a boutique in Kilkenny, called Mimis.

For her efforts Moira won a trip to Dubai for two, courtesy of Dubai Duty Free.

She will stay at the Five Star Jumeirah Creekside Hotel for five glorious nights and will enjoy a €1,000 Dubai Duty Free shopping voucher.

The official attendance on the day was 11,957 with the crowd enjoying the new facilities and basking in the Kildare sunshine.

Colm McLoughlin, and his wife Breeda hosted 320 people in the Dubai Duty Free private pavilion on the finish line where several famous faces were spotted.

Des will be heading to Lahinch in Co. Clare next week whereDubai Duty Free will be based for the company’s sponsorship of Ireland’s national golf tournament, The Dubai Duty Free Irish Open (4-7 July)

Since becoming the title sponsor of Ireland’s oldest horse race, Dubai Duty Free have consistently built on their sponsorship of The Dubai Duty Free Irish Derby and have created a festival in the true sense of the word.

On and off the track activities this week included a Golf Classic at The K Club on Thursday (27th June) where the team captained by former Irish footballer, Niall Quinn, emerged victorious.

On Friday (June 28th), the Dubai Duty Free executive team and their guests from all over the world attended a charity lunch at The Curragh Racecourse called ‘Under StARTers Orders’ when six life sized horses, made out of fibreglass and painted by leading Irish artists were sold for two charities, Irish Injured Jockeys and Sensational Kids. Dubai Duty Free in fact purchased two of these horses raising much needed funds for the two charities.

This was the first Dubai Duty Free Irish Derby Festival to be held in the plush, new, state-of-the-art Curragh facility which only added to the attraction and status of what is already an enticing prospect for owners, trainers, racing followers and anyone looking to be entertained.

Meanwhile, next week the team from Dubai will move from the east to the west of the country as The Dubai Duty Free Irish Open will place in Lahinch Golf Club, Co. Clare (Ireland) from July 4th-7th, continuing an association that began in 2015.