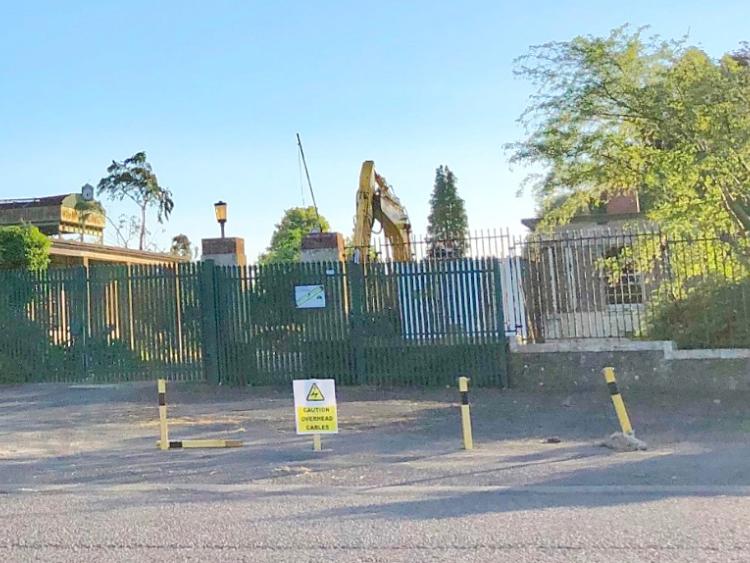 A excavator at work inside the entrance gates

Heavy machinery have moved into the site of the former Magee Barracks in Kildare Town to begin works.

The vehicles have already started preparing the site for development.

A new Lidl supermarket and a cancer therapy centre have both been given permission to be built on the sprawling site where a British barracks was first built over a century ago.

In March, Lidl was given permission for a new foodstore on the grounds of the barracks.

The planning permission includes the demolition of existing structures including the gatehouse and an ancillary building.

The single storey, licensed, discount foodstore would have a gross internal area of 2,192sqm incorporating an off-licence area. public space, parking and pedestrian access to and from Hospital Street.

The Cancer Treatment Clinic (Proton Therapy) project, being developed by Ballymount, Dublin-based firm, Lonadale Ltd.  requires several Army buildings and concrete slabs to be demolished to make way for the 3,555sqm Clinic on a site area of approximately 2.5 hectares.

Landscaped areas will also feature a variety of gardens.

A total of 80 car parking spaces and cycle parking zones are also planned.

The Barracks was first built at the start of the 1900s and accommodated British soldiers who went to fight in World War I in 1914.

The military facility coincided with the rapid economic development of Kildare Town.

In the 1930s a new barracks was built on the site and this was named Magee Barracks after Gunner James Magee who fought at the Battle of Ballinamuck in the  1798 Rebellion.

The Barracks was finally closed in September 1998 by then Defence Minister Michael Smith.