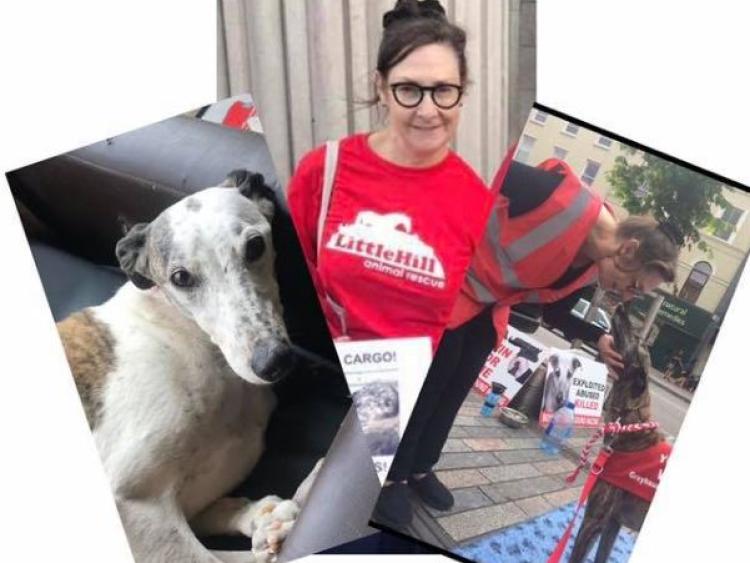 Pauline McGlynn, renowned Irish actress/comedienne is to front a protest by Kildare based animal charity, Littlehill tomorrow evening outside Newbridge Greyhound Stadium. Miss McGlynn is the patron of the Kildare based animal charity, which is renowned for its regular hen rescue runs, having to date, rescued over 30,000 battery laying hens. (the hens are frequently destroyed at 12-14 months when their laying capacity decreases slightly).

A documentary by ‘RTÉ Investigates’ ignited a national outcry in response to the appalling conditions of many breeding greyhounds and the exportation of dogs overseas, many to China. Several leading sponsors of the industry Boylesports, FBD and Barry’s Tea amongst them, said they would be reviewing their support, after the appalling ‘care’ and treatment of greyhounds particularly retired dogs and those deemed not to have speed required to race (the latter two have since confirmed the withdrawal of financial support).

Susan Anderson, proprietor of Littlehill Animal Rescue located between Ballymore Eustace and Dunlavin, slated the conditions of dogs in the racing industry.

“It’s not today or yesterday we’ve been saying this” she told KildareNow.

“Hundreds of dogs exported to China and overseas is nothing to brag about. There is no animal welfare control in China; dogs are bred under appalling conditions and then killed or sold for human consumption.

“Greyhounds often have litters from 10-12 pups; have you ever noticed huge litters of greyhound puppies running around? Where do they disappear to?”

Miss Anderson added it was shameful that the industry was supported by up to €16m of State funding, when there was little or no monitoring or welfare control.

The RTÉ Investigates programme aired last week alleged there was widespread  culling of greyhounds, based on their poor performances or lack of speed.

Following a national outcry in response to the programme findings, Minister for Agriculture Michael Creed, TD stated the industry and the Government needed to refocus its priorities away from breeding, and onto animal welfare instead.

The Irish Greyhound Board (IGB) also responded quickly to the issues aired in the documentary and stated it too wouldintroduce financial assistance for the rehoming of injured greyhounds and to extend its support for the foster care of retired or injured racing dogs.

Despite new legislation promised, Miss Anderson is calling on Kildare animal lovers to support tomorrow’s protest, and to join Pauline McGlynn and Littlehill supporters who will stage a protest outside Newbridge Greyhound Stadium from 6.30pm-8pm.

“We have to highlight the savagery and callous nature in greyhound breeding for the racing industry. Not all racing breeders treat their dogs badly, but as shown on the RTÉ programme, we need to put a stop now to the brutal culling and shipping overseas of hundreds of dogs, to an even crueller fate”. Miss Anderson stated Littlehill successfully find home for dozens of greyhounds every year, and lurchers, with two greyhounds this week going to good homes in Leinster.

KildareNow was unable to contact management at Newbridge Greyhound Stadium this evening to comment on tomorrow’s event.