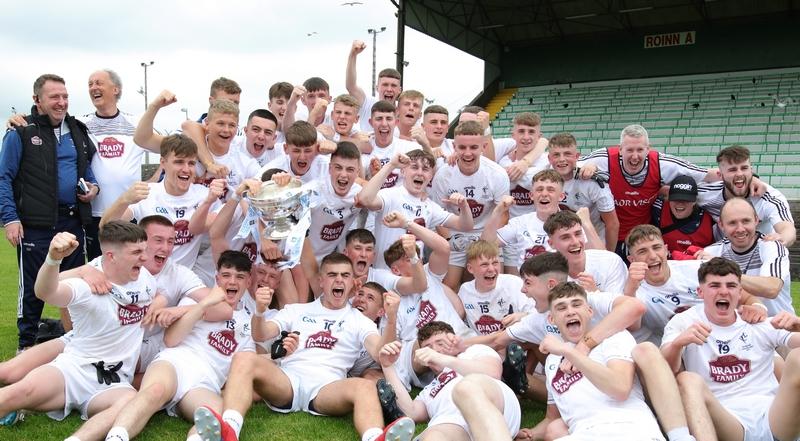 It was one of those games that you couldn't take your eyes off as Kildare made it four Leinster Minor Titles in seven years with an extra-time victory over Dublin in Navan.

Kildare were up for this and boy could you tell it and it was quite a distance their best performance to date.

Kildare looked like they had the game wrapped up in normal time before Dublin struck with a stoppage time equaliser but goals in the added on period from star forwards Aaron Browne and Eoin Bagnall sealed a huge win.

Dublin led 1-9 to 0-7 mere minutes into the second half after Luke Swan goaled but it made no difference as a resilient Kildare side full of character battled back.

Browne and Bagnall have been real leaders all campaign and were again in scoring 2-14 between them with Browne getting an extraordinary 1-7 from play but they wouldn't have got any of that ball without their defence who were simply sensational and the intensity and workrate had to be seen to be believed as entering extra-time Dublin only scored 1-2 out of a 1-11 total from play.

Mark Maguire, Conan Boran and Jack Quinn amongst others were immense as they won turnover after turnover that eventually wore the Dubs down.

As well as that the impact of the Kildare bench was big with Eoin Meehan and Mikey Delahunty putting in great displays that had no small part in the result.

Kildare started the brighter as they went into a two point lead with points from Eoin Bagnall and Aaron Browne while a quick 21 yard free from Bagnall almost caught out Hugh O’Sullivan in the Dublin goal but he did brilliantly to push the effort round the post.

Dublin soon found their groove with a 45 from Fionn Murray and they too almost found the net when Luke Swan cracked a shot off the crossbar.

Kildare wasted a couple of more chances with both Bagnall and Adam Conneely squandering attempts before Dublin kicked two ahead with frees from Murray and Ryan O’Dwyer following up on a score from play by Swan.

Points from Shane Flynn and Browne edged Kildare back in front but another Murray free brought the sides level for the second time at 0-5 apiece.

Play was then heavily disrupted with Dublin’s centre back Senan Forker suffering a heavy knock and the game was held up for a number of minutes.

Ten minutes were added on as a result and while Bagnall put Kildare in front after the Lillywhites messed up their fourth goal chance of the half Dublin kicked on with points from Murray and O’Dwyer.

Murray had a goal chance saved by Cian Burke during that period aswell and although Bagnall kicked another free for Kildare it was Dublin who took a narrow 0-8 to 0-7 advantage into the break.

Dublin had the ideal start to the second period when after Luke Swan got away he squared for Alex Rodgers and although the corner forward palmed a shot off the bar, Swan was there to bury past Cian Burke.

Alex Rodgers followed up moments later with a fine individual score and the Dubs had all of a sudden broke five points clear.

Dublin went scoreless for fifteen minutes though and Kildare took advantage as they reeled the lead in with points from Browne, Bagnall, Kevin Eustace and impact sub Mikey Delahunty.

A Murray free helped Dublin retake the lead but Kildare were relentless and they looked like they would seal the title when two points from play by Browne had them leading entering stoppage time.

Dublin to their credit didn’t throw in the towel though and fittingly Murray equalised with practically the last kick of the game as the game went to extra-time.

After being denied once Colin Ward’s Kildare side weren’t to be ousted again and they immediately made hay in the extra period with 1-3 on the bounce as a brilliantly taken Eoin Bagnall goal came before himself, Browne and sub Eoin Meehan added on points.

Dublin replied with points from Murray and Luke Curran but Kildare all but put the seal on the result when great work from Meehan put Browne in the clear and the Celbridge man made no mistake in finding the net to give Kildare a six point buffer at the change of ends.

That became an eight point lead when Flynn and Bagnall extended their tallies and although Dublin got a penalty minutes later Cian Burke denied Ryan O’Dwyer in style.

Kildare finished off with scores from Browne and Eoin Meehan as they captured their first Minor Crown in three years.