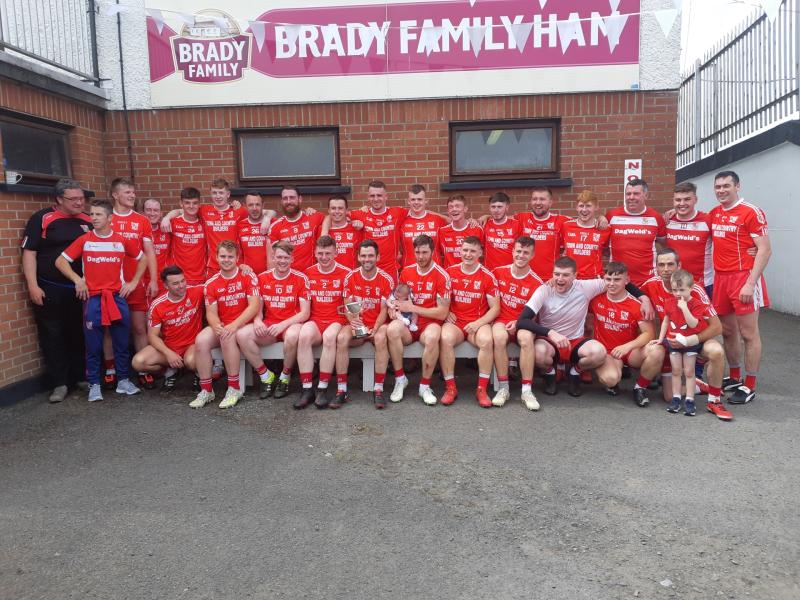 The Division 1 Senior Hurling League Title went the way of Coill Dubh after they battled to victory over Naas in St.Conleths Park.

Coill Dubh were helped with the fact that Naas played for 45 minutes with 14 men after goalkeeper Jeff Keane was sent off for a strike on Jonathan Byrne but you can only beat what is in front of you and Coill Dubh did exactly that.

There was jubilant scenes at the full time whistle as it was the first time in seventeen years that they achieved the League success which saw them overturn a big defeat to the same opponents in the first round of the Championship.

Naas rather surprisingly put Jack Sheridan in goal rather than the sub keeper after Keane’s dismissal and while the ace attacker landed two long range frees that decision may be something they regret although he did nearly snatch victory late on when a 21 yard free was saved.

Coill Dubh were like men possessed from the start and they quickly went five points clear with points from Ryan Casey, Mark Delaney, Declan Flaherty and Jonathan Byrne.

Despite the slow beginning Naas did reply with points from Brian Byrne and Kevin Whelan as they looked to get back on track but disaster soon struck when in the 15th minute the sliotar seemed to cross the Naas endline wth no fuss but Jeff Keane and Johnny Byrne got in a tangle with each other with Keane apparently striking Byrne and after consulting his umpires Dave Coady sent him off.

The sides then exchanged scores over the next few minutes with a free and 65 from Byrne on the Naas side being cancelled out by efforts from Delaney and Flaherty.

Coill Dubh only scored once more in the half with a well taken score from Johnny Byrne as Naas started to reel them in with points from Brian Byrne and Shane Broderick as well as a long range free from stand in goalie Jack Sheridan.

Both teams squandered chances for goal at the end of the half and the end result was Coill Dubh taking a 0-8 to 0-7 lead into the break.

Brian Byrne and Sheridan swapped points with Johnny Byrne and Coill Dubh captain Barry Mullins at the start of the second half before a trio of scores from Naas’s Byrne put the County Town two points ahead.

Johnny Byrne replied after pouncing on a poor clearance but after Naas sub Mick Purcell knocked over successive scores they looked set to kick on despite being down a man.

Coill Dubh had other ideas however and five points in a row between the 44th and 53rd minutes had them back in front with Delaney and Byrne extending their sizeable tallies while Luke O’Reilly and Diarmuid Cahill also got in on the act.

A Brian Byrne free ensured Naas only trailed by a point but it looked curtains for them when a long ball downfield for Coill Dubh from Mark Delaney saw the sliotar land into the hands of Declan Flaherty and despite losing his hurl he bore down on goal before he was hacked down by Sheridan and a penalty was awarded.

Delaney took the percentage call and knocked it over the bar as they led by two points entering stoppage time.

Naas had one more chance when Sheridan came up to take a 21 yard free but a crowded Coill Dubh goal line stood tall to bat the ball away as they secured a fully deserved victory.