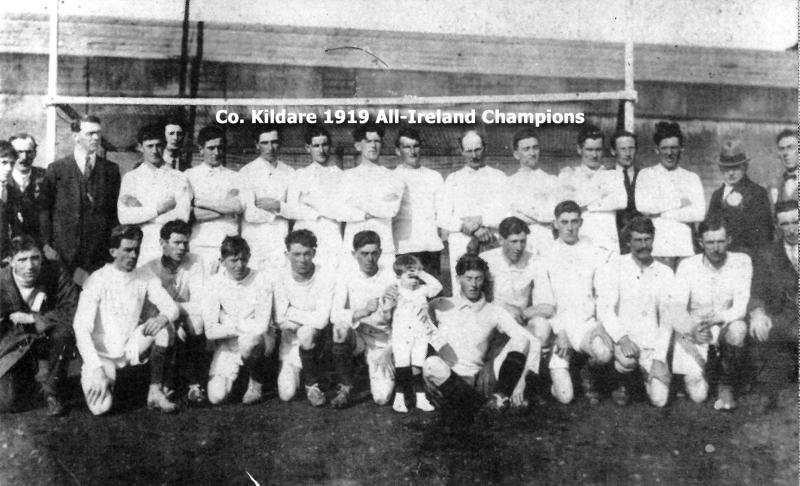 This year is the centenary of Co Kildare’s victory over Galway in the 1919 All-Ireland football final.  To mark this historic result, a commemorative event will be held at St Conleth's Park, Newbridge, on 21 August 2019 when children from Co Kildare will take part in a football blitz.

"We are calling on any descendants of the players and officials, families and/or individuals, to come forward with stories, photographs, medals and other ephemera so we can honour these All Ireland heroes. Any photographs, medals etc. can be scanned or copied and returned immediately to their owners" said Karel Kiely.

"Please contact localhistory@kildarecoco.ie and 045 448 351. Any descendants of the team are very welcome to attend the football blitz.

“We are also interested in the stories around the event as much as the match itself, such as that of the mascot” added Karel. “What happened to him?”

‘The Kildare men were accompanied by their tiny mascot in F. Conlan’s little three year old son, who wore the Kildare colours, jersey, pants and football boots complete, and wore a band across his jersey with the motto “Up Kildare.” A special ovation was accorded the tiny Kildare representative as he entered the field on the Kildare captain’s shoulder and submitted to the attention of the photographers and cinema operators.’

The 1919 All-Ireland winning team are often quoted as being the Caragh team of that year, but this is something we believe to be in error. It seems that four players were from Kilcock; they were James ‘Ginger’ Moran, George Magan, Joe O’Connor and Chris ‘Kit’ Flynn, while Frank ‘Joyce’ Conlan played for Roseberry and Larry Cribben played for Clane.

The photograph of the team and officials displayed here from 1919 includes:

Any corrections or comments are welcome.

In a report published ahead of the Leinster Final, Kildare v Dublin, the players and clubs were listed as follows:

“So, if you know anyone who might be a direct descendant or otherwise related to the men of 1919, please let us know” - concluded Karel.