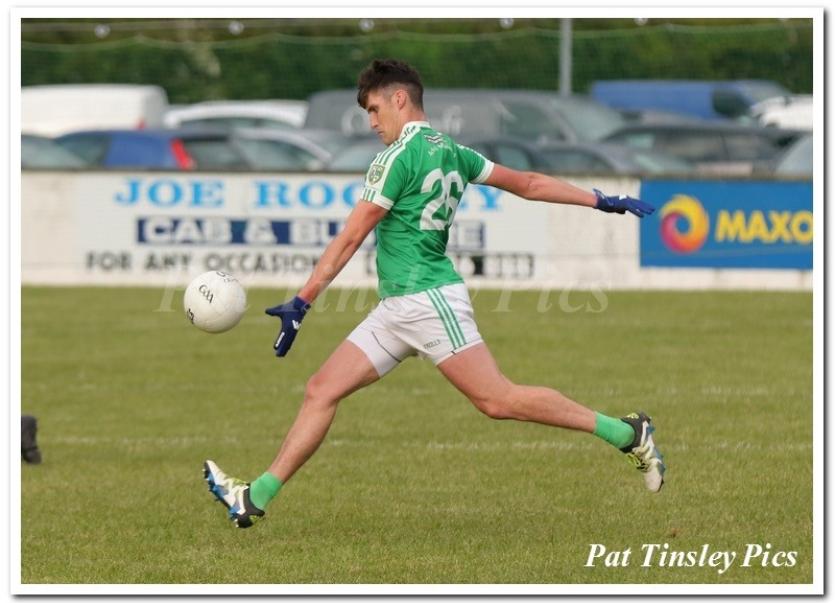 It was business as usual for Moorefield as they comprehensively got the better of St.Laurences in the Senior Football League on Friday Evening.

Coming into the game St.Laurences had an outside chance of making the top four but a win at the absolute minimum was needed and that never looked likely as Moorefield dominated for the most part.

Moorefield welcomed back Adam Tyrrell from inter-county duty and he kicked six points and along wth Eanna O’Connor their scoring accuracy was a shade too much for the opposition.

Subs Jason Phillips and David Whyte got the goals for the home side but it wasn’t all positive news with full forward Mark McDermott hobbling of with a serious looking injury in the first half.

Padraig Fogarty was the main threat for Laurences and he proved a right handful for Liam Healy as he collected 1-4 but they needed much more if they were ever going to win.

Playing with the aid of a strong breeze Moorefield made a good start as they went three points clear after five minutes with a  brace from Eanna O’Connor followed up by a well taken effort courtesy of Eoin O’Connor.

Laurences battled back though with Padraig Fogarty kicking in a scrappy 6th minute goal after a mix up between Liam Healy and Liam Callaghan resulted in the ball landing to the full forward a yard out.

Fogarty then extended his tally when he sold a few dummies before striking over and with Aaron Gorman also finding the target Laurences moved into a 1-2 to 0-3 lead.

The next twenty minutes was all Moorefield however as they went up a level with points from O’Connor and Tyrrell levelling up the contest.

The midfield pairing of Ryan Moore and Aaron Masterson also got in on the act when they scored from distance and with O’Connor and Tyrrell knocking over further frees the Newbridge side went  0-10 to 1-2 clear.

Laurences responded with a point from Adam Steed but the game was all but done as a contest by the half-time whistle with a free from O’Connor followed by a goal when Jason Phillips palmed a shot to the net after he connected with an Adam Tyrrell delivery from out the field.

Laurences were left with an eight point deficit coming out for the second half but they soon had that down to five with points from Steed and Fogarty.

Liam Callaghan got forward a few minutes later for a Moorefield goal chance but he was content with a point after receiving a pass from Jason Phillips.

Larries then kicked three of the next four scores with efforts from Steed, Tommy O’Neill and Padraig O’Neill registering on the scoreboard with a Ciaran Kelly score the only response for Moorefield.

There was only four points between them as a result but after Steed missed a couple of goal opportunities the South Kildare Club’s chances had gone with Moorefield kicking on with points from Kelly and Tyrrell.

Fogarty rounded off an impressive display with a free in the 49th minute but that would be the last score for Laurences as Moorefield finished in style with Kevin Murnaghan kicking between the posts before David Whyte marked his return with a late goal when latching onto a dropping shot from Aaron Mullins to fire past Shane Connolly.

Moorefield will now look ahead to the semi-finals with their opponents to be determined this afternoon.