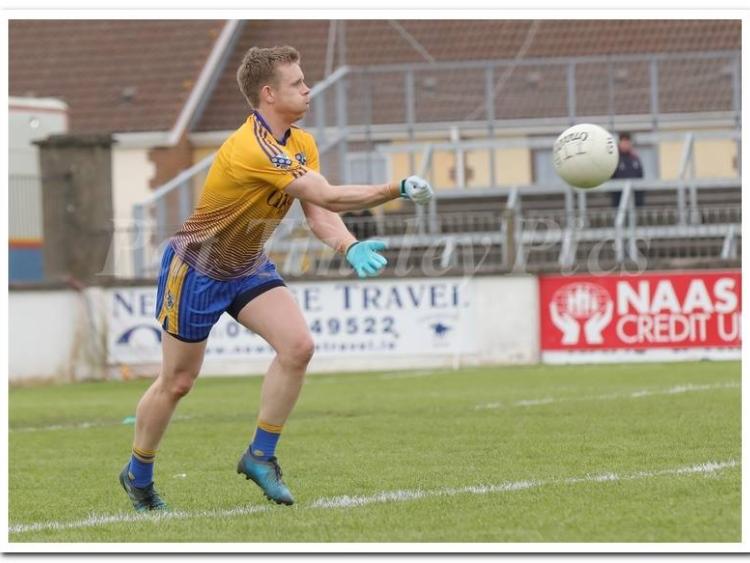 It was always likely to be dramatic and so it proved as the regulation part of the Senior Football League came to an end with Carbury grabbing the last spot in the semi-finals with a narrow two point victory over Athy.

After St.Laurences were beaten by Moorefield a night previous it left five teams in contention for one spot and despite trailing for the majority of the game Carbury grabbed it with both hands with an Eoghan O’Flaherty penalty proving crucial.

The permutations were pretty simple in the fact that if more than two of the chosen five won then the victors at Geraldine Park would likely do enough on scoring difference and despite a good deal of confusion that’s exactly how it turned out.

Johnstownbridge, Round Towers and Celbridge all won their games narrowly but in the end it was all in vein as Philly Wolfe’s outfit came out on top to join Moorefield, Naas and Sarsfields in the final four.

It’s a victory that didn’t look likely for the most part as Athy led all the way to the 55th minute but at that stage Eoghan O’Flaherty netted a penalty after Jack Cully was fouled and with all the momentum they kicked on with two more points from the main marksman O’Flaherty.

Athy couldn’t have dreamed of a better start with Cian Reynolds who was brilliant all day finding David McGovern in space in the opening minute and the midfielder found the net via the crossbar.

Tony Gibbons extended the lead before Carbury got their first point courtesy of Ciaran McKeon.

Derek McCormack kicked a nice point for Carbury a few minutes later but it was a first quarter that was almost exclusively dominated by the team in Red with a brace from Reynolds and further efforts from Kieran Farrell and James Eaton pushing them six points clear.

Slowly but surely though Carbury were eating into the deficit with two O’Flaherty points while Jack Cully on two occasions was denied for goals by James Roycroft.

Reynolds and Kevin Feely extended Athy’s tally but Carbury finished the half the better with scores from O’Flaherty, Cully and Jimmy Dunne leaving just McGovern’s goal between the sides at the break.

That three point lead was wiped out within seven minutes of the restart with a pair of Cully points following up on an Aaron O’Neill effort from distance.

Athy weren’t particularly perturbed though and after Cully and David Hyland exchanged scores the home side kicked on again with four points on the bounce easing them clear.

The fourth and fifth points from play by Reynolds came either side of efforts from Gibbons and Hyland and Athy looked set to push on in the final ten minutes but remarkably they didn’t score again.

Justin Reilly got up from corner for a fisted score in the 52nd minute but you got the feeling Carbury needed a goal and they got the chance with five minutes left after Cully was fouled in the square and O’Flaherty stepped up and rammed the shot home and a grandstand finish ensued.

O’Flaherty was now in the groove and he soon edged his side into the lead for the first time before Athy thought they were level when they were convinced an Eoghan McGlinchey shot went over but it was waved wide and with that went the defending champions League Title as O’Flaherty kicked an insurance score in stoppage time.

That stoppage time lasted seven or eight minutes but the goal Athy craved never arrived as Carbury claimed a come from behind success that now sees them come face to face with Moorefield next weekend.