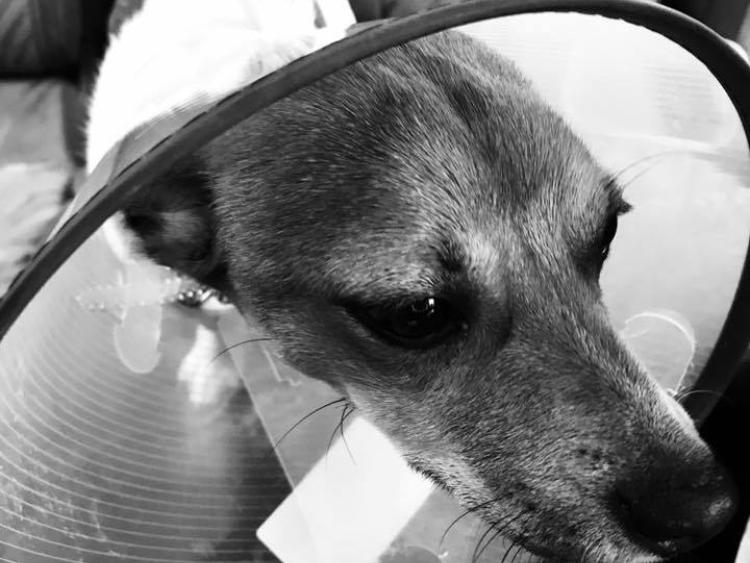 A young terrier found without water and food while tied up in Naas is recovering well says the owner of a Co Kildare animal sanctuary.

The terrier, has been named Ted, by LittleHills Animal Rescue & Sanctuary, who found him, over a week ago.

Susan Anderson of LittleHills Animal Sanctuary, based between Kilcullen and BallymoreEustace, said: “He was found grossly underweight, he flinched if you even looked at him.”

After finding Ted Ms Anderson said: “Our hearts will cry just looking at him, and the disgusting suffering he has endured - we can count every bone in his body his little spine so pronounced, as he flinches every time we look at him or move towards him, and the way he prefers to look at the wall and pretend he’s just not here at all.”

The dog has undergone surgery successfully since being found and is recovering well.

Ms Anderson said: “He is now enjoying four meals a day and is putting on weight.”

Meanwhile, Ms Anderson says that there is are now unprecedented high levels of feral cats around Co Kildare.

She said:"There are feral cats in appalling states. If everyone could take on a feral cat and neuter them, we would not have this problem. The cats keep breeding and if they are sick, they pass on the sickness to kittens."

Ms Anderson says a significant amount of feral cats have been found by the animal sanctuary in Kilcullen, Naas and Newbridge. Little Hills Animal Sanctuary is run by volunteers, establishing approximately ten years ago as a registered charity.

In Co Wicklow within the past week, the animal sanctuary got reports that three cats died from poisoning. Out of the 15 feral cats rescued, three died.

The animal sanctuary is now regularly receiving calls from vets around Co Kildare asking them to rescue animals at risk of being put down. A significant amount of people are now informing their vet that they are unable to pay vet fees to treat their sick animals and have no choice but request the vet to put the animals down.

Ms Anderson says that the sanctuary is now regularly taking in animals whose owners can't afford to look after them.

LittleHills Animal Sanctuary relies on the assistance of the public through fundraising and donations.

Ms Anderson dedicates her life to looking after animals in need.

She said: “It is all consuming.”

The animal sanctuary is hoping to hold an open day in August, for the public to visit the animals.

Also Little Hills Animal Sanctuary regularly carries out hen rescues. The hens up for adoption over the next two weekends are battery laying hens; their production rate drops marginally after 13-15 months and the entire flocks are slaughtered at farms. However, they continue laying and return to full health, as they get to experience the great outdoors and sunlight.