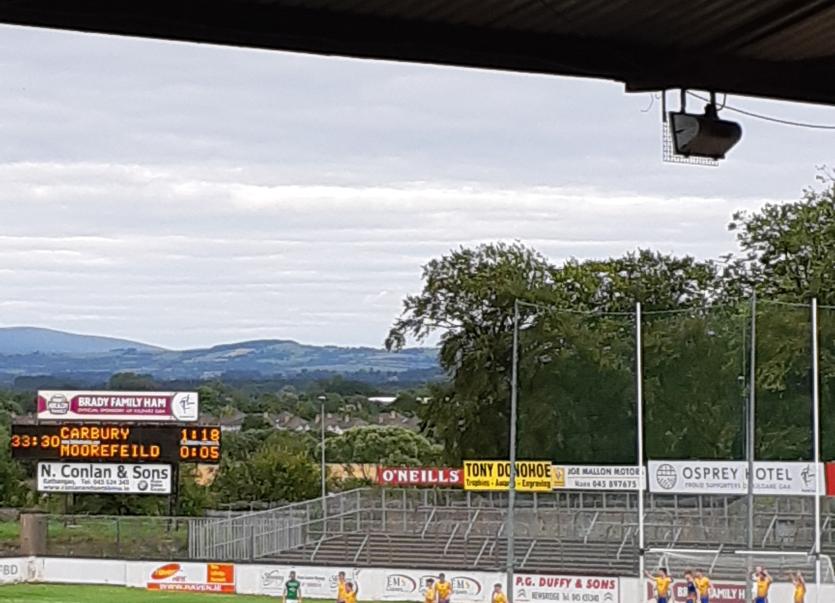 Carbury put in their best performance for many a year as they sensationally got the better of an off colour Moorefield in the Senior Football League semi-final at St.Conleths Park on Saturday afternoon.

Carbury employed a counter attacking style that caused Moorefield any amount of problems as their youth and pace caused chaos with their defence providing six points with Dean Cummins, Stephen McKeon, Andrew Dermody and Justin Reilly all on target.

It wasn't just the attacking aspect that stood out for the Carbury defence as they somehow held Moorefield to just two points from play with Adam Tyrrell and Eanna O'Connor ending up as their only scorers with both of them coming in the opening period.

Not for the first time Eoghan O'Flaherty was the scorer in chief for the winners as he notched 1-9 but he was ably assisted all over the field by a super team performance.

Moorefield only finished with 14 men as Sean Healy was sent off late on but it had no effect on the result whatsoever and Ross Glavin must now go back to the drawing board ahead of the resumption of the Championship in three weeks time.

Moorefield started brightly with Adam Tyrrell notching a 3rd minute free after Ryan Moore was fouled but Carbury quickly responded with three scores in a row as Eoghan O'Flaherty converted a pair of frees either side of a Stephen McKeon effort from play.

Tyrrell and Eanna O'Connor then kicked very similar scores from near the left sideline as the Moores tried to go up a level but a score from Andrew Dermody kept Carbury's noses in front.

The final quarter of the half was exclusively dominated by the team in Blue and Yellow as their belief grew stronger by the minute with two more O'Flaherty frees giving them a 0-6 to 0-3 lead.

It was clear to see at this stage that Moorefield were on the rack but one just presumed they would eventually get into gear like they always do but four more points before half-time put them under incredible pressure.

O'Flaherty kicked three of those efforts with Justin Reilly also landing a fine score on the counter and while that gave Carbury a seven point lead it could have been even greater if Tom Kinsella didn't expertly keep out Stephen McKeon.

Prior to the throw-in for the second half one was expecting the Moorefield backlash but within 16 seconds that looked to be up in smoke as O'Flaherty palmed in a goal as Aaron O'Neill and Jack Cully took advantage of uncertainty in the Newbridge side's defence to set up the Carbury sharpshooter to fire past Kinsella.

Derek McCormack extended that lead to push Carbury's lead out to eleven points and without tempting fate they looked to be home and hosed.

Moorefield threw everything at it as the experienced David Whyte, Daryll Flynn and Jason Phillips all appeared off the bench but nothing really changed with two Eanna O'Connor frees just about keeping them within viewing sight.

An incident that rather summed up Moorefield's frustration was Sean Healy kicking out at Brian O'Flaherty seven minutes from time which saw him see red.

O'Connor and Tyrrell tried their best for late goals but their attempts hit the bar and were saved respectively and while O'Connor did kick a late free it was to be Moorefield's last score.