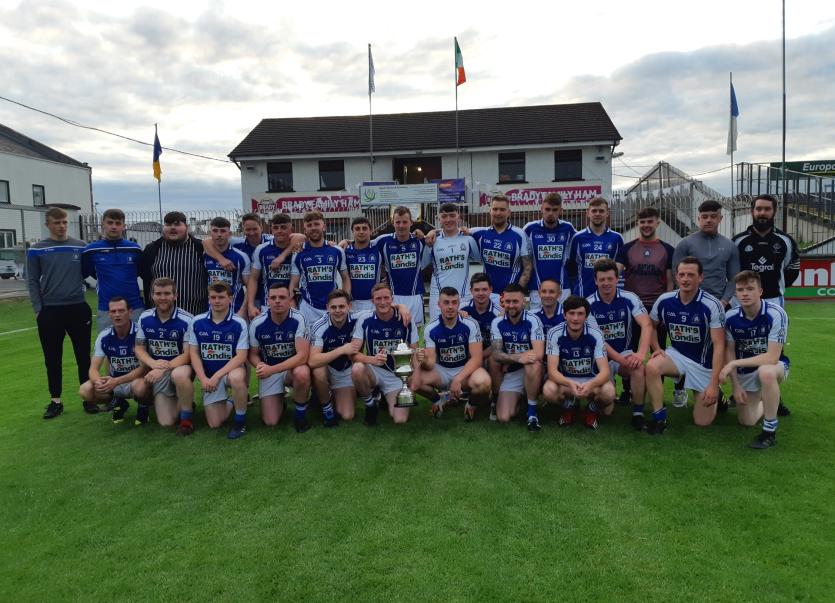 Castledermot captured the Division 2 Senior Football League Title after they overcame Raheens in a tightly contested affair on Saturday night.

Both teams sealed their promotion to the top tier a couple of weeks previous and it was the men from the South of the County that did enough with the free taking of Gavin Keating proving crucial as he finished with nine points in total.

Castledermot had more of a threat from play and dominated for three quarters of the game but a late Raheens surge had them under pressure until both David and Gavin Keating kicked insurance scores.

There was a number of players missing on either side with Castledermot's Aaron Murphy who was brilliant in the Championship contest a couple of weeks ago absent as well as manager Damien Hendy while Raheens star forward Paddy Woodgate is currently stateside.

Castledermot started with plenty of intent and raced into a 0-4 to 0-1 lead after only twelve minutes with Gavin Keating knocking over a trio of scores of which two came from play to add to an earlier effort from Emmet O'Keefe.

Rob Thompson from a free got Raheens on the board in the 7th minute with a free and team captain Alan Igoe followed suit a couple of minutes later.

It was a half where Raheens failed to score from play though and Castledermot kept up the pressure with Keating converting his second free although if Anthony Herbert had let the play go on a bit longer Paddy Whelan was in on goal but they had to be content with the point.

Igoe landed two further placed balls for Noel Mooney's side but they went into the break trailing after Keating and Conor Nolan added to Castledermot's tally.

Nolan was also out of luck when he fired a shot across the face of Declan Campbell's goalmouth but after that chance passed Castledermot went in leading by four points.

Castledermot continued to control things at the start of the second half with points from Keating and O'Keefe pushing them clear on the scoreboard.

Raheens looked to be in real trouble but after Igoe landed another free they began to get a bit of momentum going with four points in a row getting them back within two points.

It was a long time coming but a 41st minute score from David Malone was Raheens first from play and just like buses a few more duly followed with Malone again on target before Igoe on the double had the Caragh based side within touching distance entering the final few minutes.

O'Keefe and Rory Donnelly then exchanged efforts and Raheens looked to have a real chance to get within a point when they were awarded a scoreable free but instead of going for a shot at the posts Tom Early tried to go short to work a goal but the move broke down.