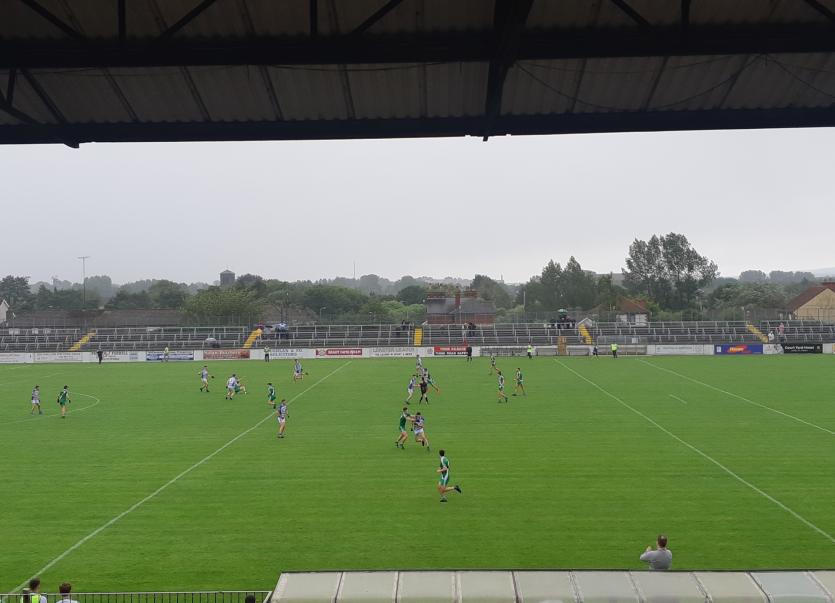 Naas will play Carbury in the Senior Football League Final after they claimed a nine point victory over Davy Burke’s Sarsfields on Sunday afternoon.

The game was played against the backdrop of horrendous conditions but Naas dealt with it better with three rather fortunate second half goals putting the seal on the result.

Sarsfields had a stiff wind at their back in the first half but a Colm Joyce goal had Naas’s noses in front and while the Sash battled back with the impact off the bench from Ray Cahill and a well taken Declan McKenna goal, Naas’s late surge which was led expertly by Eamonn Callaghan proved too much.

With torrential rain almost all the way through any score was going to be important and Naas began with Luke Griffin kicking a 2nd minute point.

Sarsfields responded with two well taken points from Con Kavanagh and Alan Smith but there was still no separating the sides come the ten minute mark with Eamonn Callaghan converting a free.

Matty Byrne and Barry Reynolds then swapped points before Naas struck for an all important goal when a flowing team move involving Callaghan and Sean Cullen resulted in Colm Joyce palming to the net past John Melia.

Brian Kane also broke free during this period but he shot wide when in the clear and Sarsfields took advantage with Declan Kenna scoring nicely on the turn.

The Sash would have liked to go into the break in front with the elements at their back but that Joyce goal gave Naas the edge with Callaghan and Eoghan Bateman adding to their tally as they went into the dressing rooms leading 1-5 to 0-5 after another Matty Byrne score kept Sarsfields in touch.

Naas would have went into the second half in confident mood but probably ringing from their managers advances Sarsfields were a different team as Darragh McHugh rattled a shot off the bar within seconds of the restart but the goal did arrive a couple of minutes later.

A long ball inside from Con Kavanagh went over the head of Naas corner back Johnny Heavey and Declan McKenna took advantage in sliding a shot to the corner of the net to level up matters.

Ray Cahill had appeared as a second half substitute for Sarsfields and he made an immediate impact as himself and Callaghan shared scores with the teams tied at 1-6 each.

Naas remained composed though and kicked three points in a row with a pair of Callaghan frees coming either side of a score from play by Darragh Kirwan.

Kirwan could have ended the game when he shot wide in the 43rd minute and when Cahill knocked over consecutive points it looked set for a dramatic last quarter.

It turned out like that but not the way most would have predicted as Naas took control in strange circumstances which started when they got their second goal after a long ball from Eamonn Callaghan went all the way to the net after Sarsfields keeper John Melia was caught badly out of position.

Points from Conor Hartley and Sean Cullen left four points between the sides but the game was soon put to bed when another freak goal for Naas occurred as the conditions took their toll when a point attempt from Colm Joyce was deflected into the path of his brother Ronan who struck the ball home.

Byrne rounded off Sarsfields tally at the beginning of stoppage time but Naas weren’t finished as Callaghan collected another goal when a ball inside landed into the hands of Melia but as the keeper slid to collect the ball it fell out of his grasp and the former Kildare star stroke home to an empty net.

As a result Naas eased to victory and set up a rare League Final where there is no Newbridge side involved.