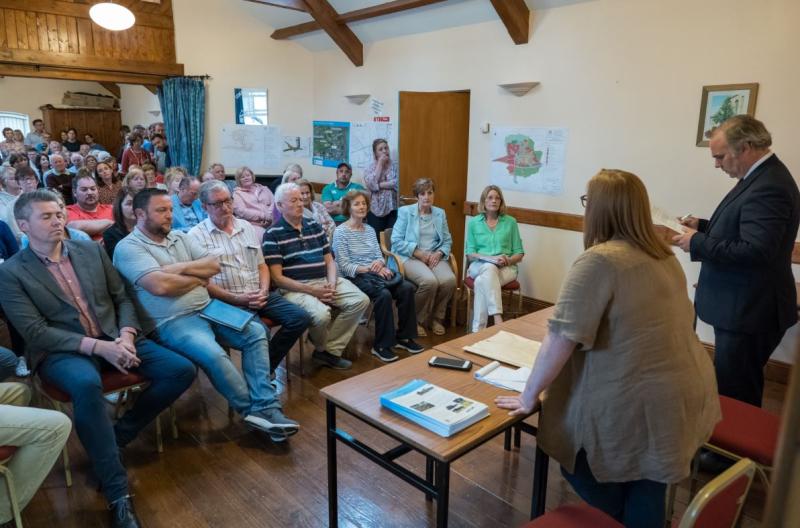 A section of the crowd being addressed by Cllr Suzanne Doyle and Cllr Mark Stafford. Photo: Tony Keane

Almost 150 people attended a meeting in Kildare Town last night to discuss a proposed orbital-style route around the town centre.

The meeting in the Beech Room in Áras Bhríde in the town was chaired by Cllr Suzanne Doyle and also attended by public representatives Cllr Mark Stafford, TD Fiona O'Loughlin and Cllr Kevin Duffy.

Many concerns were expressed about the new orbital-style route being planned as part of the Kildare Town Northern Link and South Green Area Access Improvement Scheme.

Two roads (Pigeon Lane and White Abbey Road) that are currently used to access the town centre from the Green Road area will be pedestrianised and a new Link Road through two fields will bring traffic from the Carmelite Friary graveyard directly to the Monasterevin Road.

Kildare County Council has insisted that the proposed route changes are necessary to reduce congestion, improve pedestrian and cyclist facilities and protect the heritage and character of the town centre.

The planned route is also expected to serve a nearby potential housing development north of the town of nearly 200 homes which was granted planning permission.

Local residents and public representatives said there was a need for an overall traffic management study of the entire town due to the increase in residents in coming years due to new developments.

Speakers said congestion was already heavy on many streets during school runs and during Masses at the Carmelite Church or GAA matches at Round Towers club.

Cllr Stafford agreed that there was limited public consultation on the new routes and said that councillors were first informed on June 12 - less than a week before a public information meeting hosted by the Council and consultants.

Historian and local resident Mario Corrigan said every household or affected individual or group should send a submission.

Suggestions were made to hold another meeting in a larger venue, possibly the CMWS Hall, at a future date.

It was agreed that a delegation of residents could prepare meet the Council's road engineers and consultants to discuss the proposed routes.