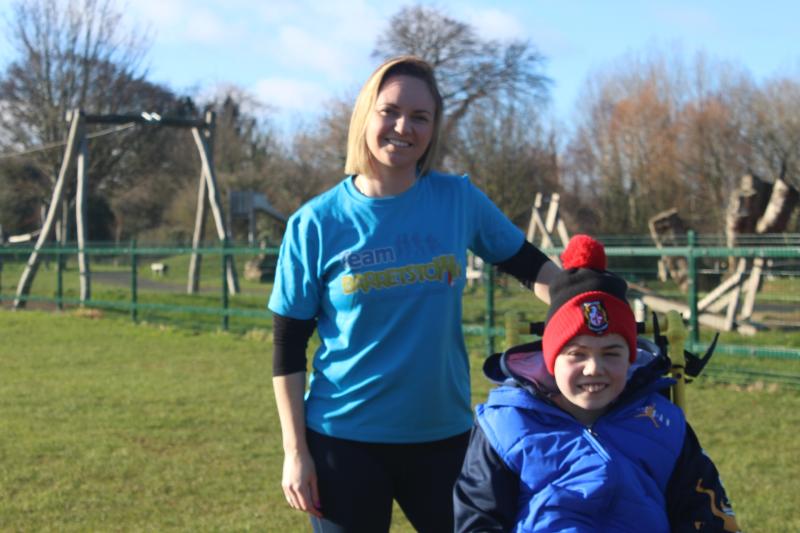 Children’s charity Barretstown which is based in Co Kildare has announced that 13-year-old James Casserly from Dublin will take part in the 2019 KBC Dublin Marathon on its behalf for the fourth consecutive year.

James, who has cerebral palsy and juvenile arthritis, has been a camper at Barretstown and has led Team Barretstown in the race every year since he was just 10 years old.

In 2018 he took part using an assisted chair, pushed by his Dad, Dan; this year his aunt, Alison Casserly will accompany James in his bid to reach a four in a row and to raise funds for Barretstown in the charity’s 25th anniversary year.

Commenting on her son’s achievement James’ mum Vicki Casserly, a local Councillor for Lucan and Mayor of South Dublin County Council, said: “We are so proud of James for committing to take part in the Marathon again this year, and are really excited that he’s teaming up with his aunt Alison this time around. James has never let his illness stop him from taking on big challenges.  Barretstown is not only a special place to James, but it’s equally special for us as a family.

"It brought and brings so much happiness to us and it’s a place where we can just be, Mammy, Daddy, James and Tom, not James who is unwell.  The label is taken away and we just have a crazy amount of fun which is so therapeutic for all of us.  Being part of fundraising has brought us all on new adventures and pushed us all to try something new, all the while raising much-needed funds.”

Dee Ahearn, CEO of Barretstown said: “All of us here at Barretstown are in awe of James’ dedication, we’re delighted that he is going to lead Team Barretstown in the Marathon for the fourth year in a row and especially in our 25th anniversary year.

Earlier this year we launched our ‘Press Play’ campaign to raise an additional €1 million per year over the next five years, so that Barretstown can reach every child with a serious illness in Ireland who could benefit from one of our life-changing programmes. Events like the Marathon are such an important part of our fundraising efforts every year so we really appreciate everyone who takes part on our behalf.”

The KBC Dublin Marathon will take place on Sunday 27 October, 2019. Barretstown’s mission is to rebuild the lives of children affected by serious illness and their families, through life-changing Therapeutic Recreation Programmes in a safe, fun and supported environment.

For more about the Press Play campaign visit www.press-play.ie.