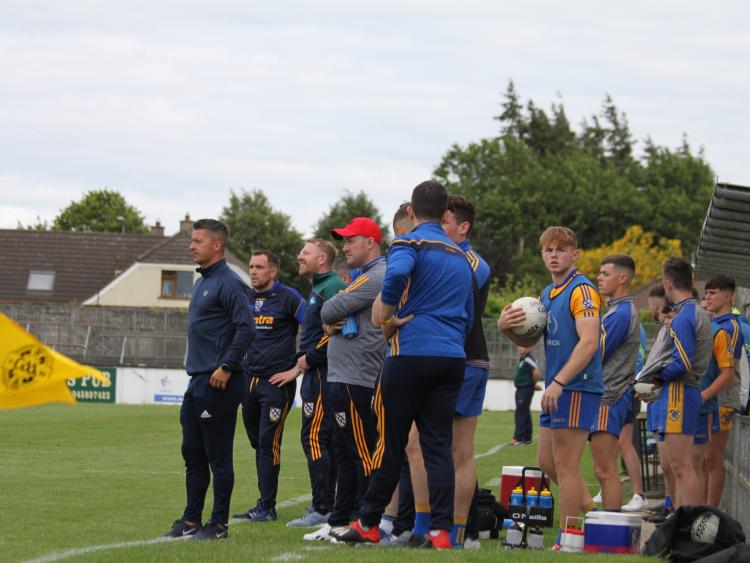 It was a result that not may people would have seen coming as Carbury emphatically got the better of Moorefield on Saturday afternoon in the League Semi-Final.

For Carbury manager Philip Wolfe it would have been especially strange as he plotted the downfall of his own club where he has family and friends deeply ingrained.

The former Moorefield player was even coaching up in the Newbridge Club on the day of the match but as he states he had a job to do.

"Everything went well for us and I said previously it was a strange enough day for me as I would have been up in Moorefield at 10.00 training all the kids with my Moorefield tracksuit on as the underage development officer".

"I've held the role for four years and I'm vice Chairman of the underage aswell so it was a bit weird, Moorefield is my club and always will be but I'm doing a job with Carbury and Moorefield have an exceptional management team".

"I'm trying to get my foot on the ladder in terms of management and Carbury is heading in the right direction".

Carbury were brilliant throughout the 1-18 to 0-6 success as they completely negated the County Champions with their first half performance very striking.

After narrowly being beaten by Moorefield on a couple of occasions it's a result that was a while coming but to get it will only give Carbury more confidence ahead of the Final on Sunday.

"We done very well particularly in the first half and nothing really went wide. Everything we kicked went over and we added on score after score".

"We've had a few off days where we have missed chances and not got the luck but we got the rub of the green there. We came in with a game plan and we got that spot on in terms of our three main matchups. Some of their marquee players were nullified as best as we could do and while they still got scores we were able to keep it to a minimum and from there we grew into it".

"I watched last years Championship game between the two teams last year and Carbury were in front by twelve points at one stage and ended up losing so we hammered that home with them at half-time. We had to reset and go again and we did it well".

"That win was huge for the player's belief because we lost 4 League games and all of them were at home with three of them against Johnstownbridge, Celbridge and Moorefield all by a point while Sarsfields beat us by 3" .

"That negativity might set in as a result of coming up short but beating Moorefield might have put that to bed and enable the lads to go on from here", Wolfe admitted.

Remarkably Carbury kept Moorefield to only two points from play and even at that the scores taken by Adam Tyrrell and Eanna O'Connor were of the highest order and shutting that pair down proved vital.

"We knew we had to be really disciplined in the tackle and if we gave away frees Eanna O'Connor and Adam Tyrrell would slot them but in fairness to our lads who are pretty young in the backline they did well".

"Dean Cummins was unbelievable and kicked two points from corner back as well as doing a really good job on Eanna O'Connor and one of our stalwarts Willie Groome took up Adam Tyrrell and he did a good job on a player who is one of the best forwards in the County".

"Those matchups we got right and look there is nothing won, Moorefield will be back and are still arguably the best team in Leinster so we are not foolish that we are going to win a Championship or anything like that but we are moving in the right direction and it just shows that the process and plans that we've laid down are working and can work against the best teams".

The Carbury boss also gave special praise to Aaron O'Neill for his role in midfield and insisted that he prefers him outfield especially when they have a keeper of the calibre of Wayne Cummins.

"I personally think that Aaron O'Neill is one of the best midfielders in the County and he proved that in victory when up against an exceptional young talent in Aaron Masterson. Aaron O'Neill is very explosive, I like him in there and he is going to be a handful for anybody going forward".

"Wayne Cummins is a really good goalkeeper and he got a clean sheet as well as having good kickouts so he is improving all the time", stated Wolfe.

Naas now await in the Final on Sunday afternoon and while most would see them as favourites after such an impressive win Wolfe is adamant they are the underdogs as they hope to achieve one of their aims for the Season.

"Our target at the start of the year was to get to the League Semi-finals and now our aim is to go on and win it. The Final wont be easy, Naas are a good team and they finished ahead of us in the League so they will go in as favourites but we don't mind being the underdogs and if we can come out and play like we did against Moorefield we will be a match for anyone".