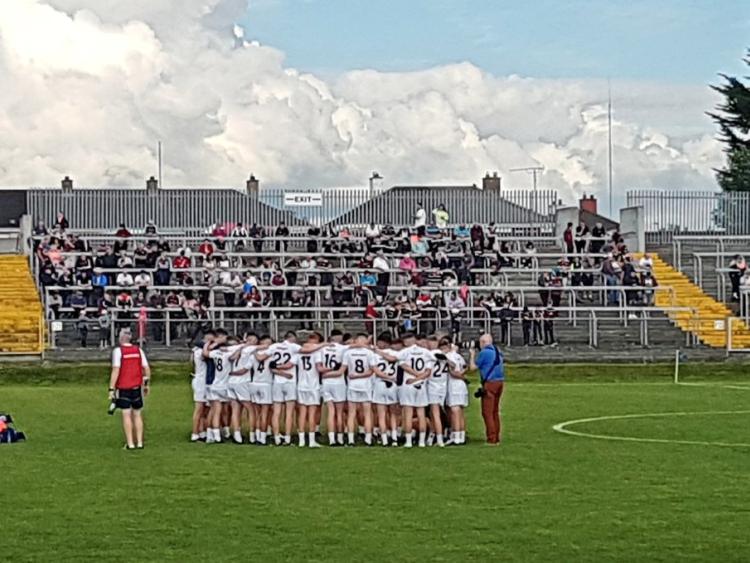 Goals in each half gave Galway a fully deserved eight point victory over Kildare in the All-Ireland Minor Football Championship Quarter-Final at Pearse Park on Saturday Evening.

Kildare always trailed in a game they were chasing from the start after James McLaughlin netted in the opening minute for the Connacht finalists.

Kildare did get back within two points with ten minutes remaining but just when there seemed as if there was hope Galway ended the contest with a well worked Nathan Grainger goal.

Kildare had decent performances in Adam Conneely, Aedan Boyle and Aaron Browne but the challenge in the end proved too much.

It’s another defeat to the Connacht Side that certainly has the hex over Kildare as you have to go all the way back to 1985 for a Lillywhite victory with Galway gaining big wins at Minor, Under 21 and Senior during that time.

Kildare made two changes prior to the start with Mark Maguire and PJ Cullen coming into the team at the expense of both Ryan Comeau and Joel Kavanagh while Galway remained unchanged.

It was a disaster of a start for Colin Ward’s Kildare side as James McLaughlin caught the throw in for Galway and duly stormed upfield before expertly placing a left footed shot under the body of Cian Burke for a well taken goal.

Kildare to their credit responded via Eoin Bagnall but the Tribesmen were soon further ahead with the silky corner forward duo of Nathan Grainger and Daniel Cox kicking points.

Kildare hit back with Bagnall from a free and Adam Conneely with a score on the turn after catching a long Kevin Eustace ball inside but Galway always seemed to have an answer with team captain and former Clane Minor star Tomo Culhane scoring from range to leave the Westerners leading 1-3 to 0-3 after a hectic end to end opening ten minutes.

Aaron Browne kicked two further points for Kildare either side of Culhane and Evan Nolan registering on the scoreboard but the Leinster Champions were soon back within one through Bagnall and Ciaran O’Brien although the Kilculllen man injured himself in the midst of scoring and had to be replaced by Daniel Woulfe.

Bagnall converted another free before the break for Kildare but it was Galway who went into the tunnel the happier with points from Grainger and Culhane giving them a 1-7 to 0-8 lead.

Kildare had the aid of a slight breeze in the second period and would have targeted a bright start but Galways’ innovation on their kickouts and their dominant midfield sector was causing them no end of trouble and they kicked the first four points to go six clear.

Warren Seoige scored consecutive points which were followed by Evan Nolan and Daniel Cox and all of a sudden Galway looked in complete control.

Kildare could have threw in the towel there and then but this group is nothing if not defiant and their character came out again when a pair of effortless Aaron Browne scores sailed over the crossbar before a Bagnall free got them back within a kick of the ball.

Culhane and McLaughlin pushed the Galway lead out again a couple of minutes later but Kildare’s momentum wasn’t showing signs of waning with Conneely, Browne and Aedan Boyle all scoring and Boyle even had a goal chance well blocked moments earlier.

Kildare looked like they had a chance but that was quickly extinguished in the 52nd minute when a devastating Galway break which started when James McLaughlin made a great block and it ended with Seoige offloading to Grainger to place a shot past Cian Burke.

Kildare only scored once more from that point on with PJ Cullen splitting the posts as Galway turned on the style late on with points from Culhane, Cox and Niall Cunningham as Galway return to Croke Park after setting up a 2-17 to 0-15 victory.