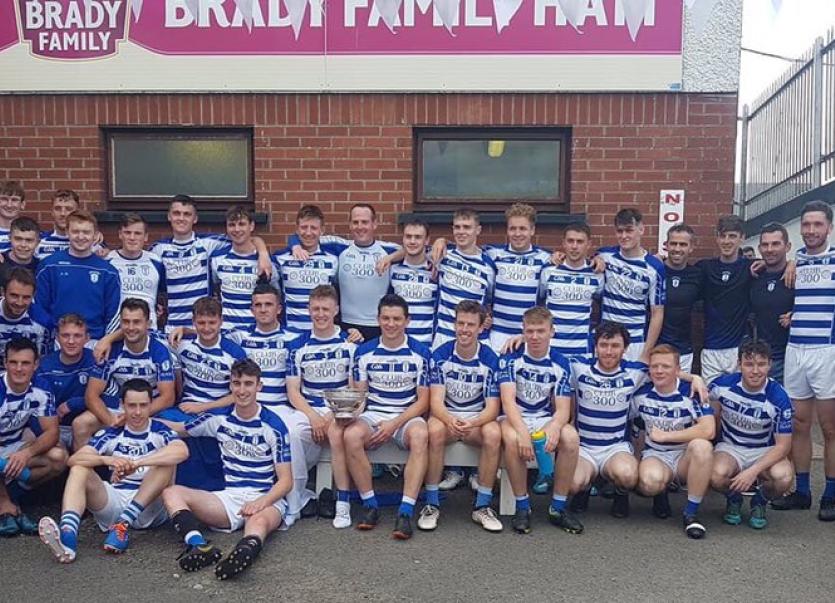 In the 100th edition of the Senior Football League it was Naas who took home the prize as they overcame Carbury after extra-time on Sunday afternoon.

For Naas it was their first League Title since 1995 as they starved off the threat of Carbury in a thrilling contest.

Naas started well but an Eoghan O’Flaherty penalty looked to have Phillip Wolfe’s outfit on course for the Title until Naas rather luckily found the net via Luke Griffin in the 37th minute and with Darragh Kirwan finishing with seven points they eventually got the lead.

Carbury though forced extra-time with O’Flaherty scoring with the last kick of normal time but it was a step too far for them in the extra period as Naas’s extra youth, energy and positivity won the day as they kicked clear with their subs having a huge impact.

Fresh from beating Sarsfields, Naas made the early running with two points from Darragh Kirwan and although Morgan O’Flaherty replied Eamonn Callaghan and goalkeeper Barry Reynolds with a free from range gave the County Town an early cushion.

Eoghan O’Flaherty soon kicked points from play and a free before Jimmy Dunne brought the sides level at 0-4 apiece.

Dunne was proving a big threat for Carbury and his second point gave his side the lead for the first time after Naas squandered a wonderful goal chance down the other end which they ultimately made a mess of.

O’Flaherty converted a free on the back of that miss before his same number on the opposite side and former county team mate in Eamonn Callaghan did likewise.

That Naas free came after Mark Cully bodychecked Ailin McDermott off the ball and a black card was shown to the Carbury youngster.

A goal was always going to be crucial and the first one arrived in the 23rd minute when after an O’Flaherty free rebounded off the post Jack Cully gained possession but he was brought down for a spot kick which O’Flaherty made no mistake in slotting home.

Naas were visibly shaken in the aftermath as a poorly directed kickout from Reynolds resulted in Derek McCormack bearing down on goal but the Naas keeper made amends with a good save.

Callaghan and O’Flaherty duly shared scores afterwards as Carbury brought a 1-7 to 0-6 lead into the break.

Luke Griffin kicked the opening point of the second half off his weaker right foot before Carbury sub James Kelly cancelled it out immediately.

Carbury looked pretty comfortable in defence but that all changed when a hopeful punt into the square from Eamonn Callaghan caused consternation with a poorly directed punched clearance  from Wayne Cummins landing at the feet of Griffin and he fired a shot into the top corner.

Carbury steadied the ship with back to back points from O’Flaherty and Dunne to stay three clear while Darragh Kirwan kept the Naas scoreboard ticking over.

Carbury’s accuracy was unnerving however with O’Flaherty and Justin Reilly pushing the lead out to four at the halfway mark of the half.

Naas were nowhere near finished though and they kept driving on as they scored six points on the trot to retake the lead late on.

Kirwan and Callaghan were excellent throughout and they kicked a pair of points each with Griffin and Brian Kane also finding the target.

An O’Flaherty free with a minute remaining left just a point in it but when Colm Joyce kicked a cracking score under fierce pressure Naas looked to be home and hosed.

That wasn’t to be the case though as firstly a free from O’Flaherty was followed by a super score from the same player as the teams had to face up to extra-time.

Despite O’Flaherty and Kirwan sharing points Carbury soon ran out of steam in the extended period with Naas having the edge where Cathal Daly played a huge part in defence from the bench and up front a quickfire brace from Dean McHolmes gave them a two point advantage at the change of ends.

Carbury stayed competitive with a James Kelly point but after a few missed chances, Naas took the bull by the horns with points from Callaghan, Joyce and Kirwan crowning a stunning victory on a 1-21 to 1-17 scoreline.