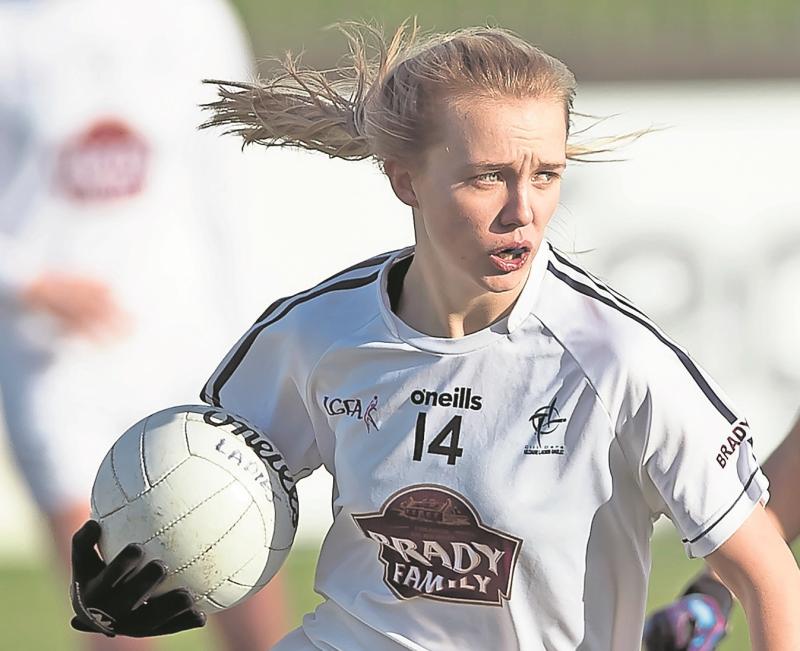 It was a day of mixed emotions for Kildare as they fell to a nine point defeat at the hands of Down but they still did enough to qualify for the Quarter-Finals of the All Ireland-Intermediate Championship.

The disappointment was obvious though and as a result of the loss they surrendered top spot in the group to Sligo who defeated Limerick.

A thirteen point reverse or more would have eliminated Kildare and remarkably there was a stage where that looked entirely possible as Down threatened every time attacked.

In the end Kildare’s discipline or lack of was the telling factor with five players sin binned over the course of the sixty minutes and it was always going to be a struggle being down players at that strike rate.

Kildare made a good start with points from Neasa Dooley and Molly Price cancelling out the games’s opening effort which came courtesy of Down’s Natasha Ferris.

Anna McKee rattled a shot off the crossbar during the early stages for the Mourne County but a goal did soon arrive with Sarah Dougherty scoring at the end of a well worked move.

Points from Price and Lara Curran got Kildare back level before Jessica Foy and Siobhan O’Sullivan exchanged efforts that left the sides deadlocked on a 0-5 to 1-2 scoreline.

Kildare then got two sin bins in as many minutes with O’Sullivan getting her marching orders for a high challenge before Neasa Dooley followed suit when she got in a tangle with Dougherty on the near sideline.

The Kildare frustration was plain to see and they went into the break trailing after Anna McGee kicked a point from play in stoppage time to give Down the edge.

The second half was nothing if not eventful and after Daniel Moynihan made a couple of half-time substitutions it was one of those players that gave Kildare the lead with Ellen Dowling shooting for a point but her shot dipped and went into the top corner past Kate McKay.

The Down response was instant though with a point from Ferris added to by a goal from Jessica Foy.

Kildare battled back with a free from Lara Curran but a sin bin for Orlaith Sullivan mere seconds after she came on to the pitch certainly stalled that momentum.

Down thus took advantage with points from Ferris and Lauren Cunningham and while Kildare thought they equalised when a Down player knocked the ball into her own net it was disallowed for a square ball.

Kildare didn’t let that overly affect them with a Curran free and Dooley slicing a shot against the woodwork but the bad news kept coming with impressive full back Lara Gilbert going down with a serious looking injury.

Further sin bins soon followed with Sarah Munnelly and Claire Sullivan leaving the pitch for a period and it was at this stage that Down sealed the victory with goals from Foy and Mairead Kavanagh coming hot on the heels of points from Ferris and Cunningham.

That left Kildare trailing by eleven points and they were glad of Orlaith Sullivan kicking two late frees to at least put them into the next round but not the way they would have liked.

Roscommon now await in the last eight this weekend.