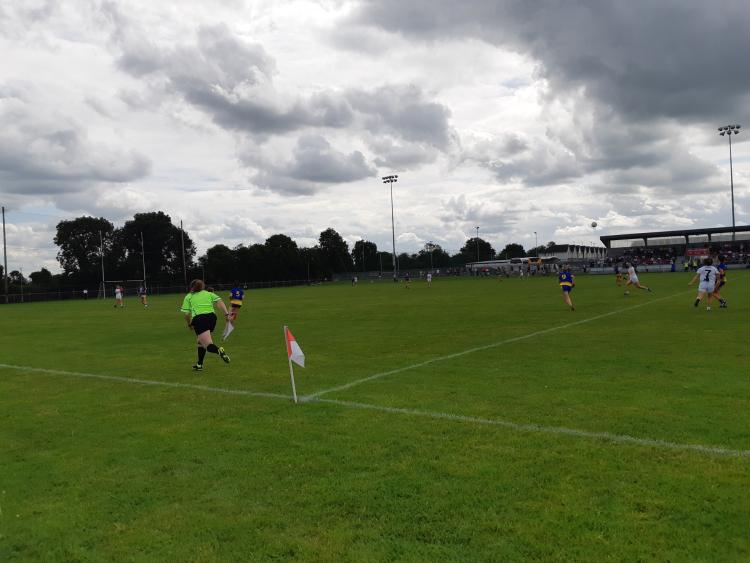 Kildare’s All-Ireland Intermediate Football Championship campaign came to an end when they fell to a heavy defeat against Roscommon in Kinnegad on Sunday afternoon.

Despite Daniel Moynihan’s team getting two goals in as many minutes during the first period courtesy of Neasa Dooley and Ellen Dowling they were outclassed for the most part.

The Rossies opened up an early lead when Aimee O’Connor netted and the Connacht side maintained parity at the break when four points in a row got them in level.

That spurt was really the making of the win for Roscommon as they kicked clear on the resumption with the aid of a sizeable breeze while Kildare only scored five points in total.

Despite the defeat Kildare still had gallant performers in Molly Price, Siobhan Sullivan, Trina Duggan and both goal scorers but it wasn’t enough in the end.

The win puts Roscommon into the last four where they will collide with Meath in a fortnight’s time.

Neasa Dooley kicked a point for Kildare in the opening minute and while key player Rebecca Finan responded with a free the sides then swapped efforts which resulted in the game being tied after ten minutes.

Orlaith Sullivan and Natalie McHugh both scored before Ellen Dowling edged the Lillywhites back in front after receiving an inside pass from 17 year old Sullivan.

Roscommon then struck for the game’s opening goal in the 12th minute when Finan gassed Rachel Cribbin for pace before offloading to Aimee O’Connor who palmed to the net past Dervla McGinn.

Roscommon followed up with a point from Rachel Fitzmaurice as they pushed three points clear.

There was only 60 seconds separating the two three pointers which began when after a bursting run Price found Ellen Dowling and she placed a shot home and before you got your breath back Neasa Dooley had raced away from the Roscommon defence and beat Helena Cummins with aplomb.

Kildare were all of a sudden four points ahead but the lead wouldn’t last as Roscommon kicked on with points from Finan, Fleming and Roisin Wynne leaving the sides deadlocked at the interval.

Roscommon had the breeze at their back on the resumption but Kildare struck first with Price kicking her second point from distance but the second half was mostly a struggle for the team in White as they struggled for scores.

Three Roscommon points on the bounce courtesy of Finan who finished with nine in total, Wynne and O’Connor had them back in front and it was a lead they never relinquished from there.

Kildare kept in touch with points from Sullivan and Price but every time they scored Roscommon responded in kind and their scores came a lot more easier.

Points from Finan and Jenny Higgins had Roscommon 1-14 to 2-8 ahead before Sullivan kicked her solitary free but the tightness didn’t last with the winners scoring 1-4 on the trot to end the game as a contest.

A point from Finan from range was added to by a goal from Higgins when a flowing move involving Fleming and Siobhan Tully ended with the substitute getting Roscommon’s clincher.

Fittingly Finan ended the Rossies tally with three consecutive frees and while Sullivan retaliated it arrived all too late as Roscommon ran out convincing winners.