Pauline went for a routine eye test at Specsavers in Newbridge 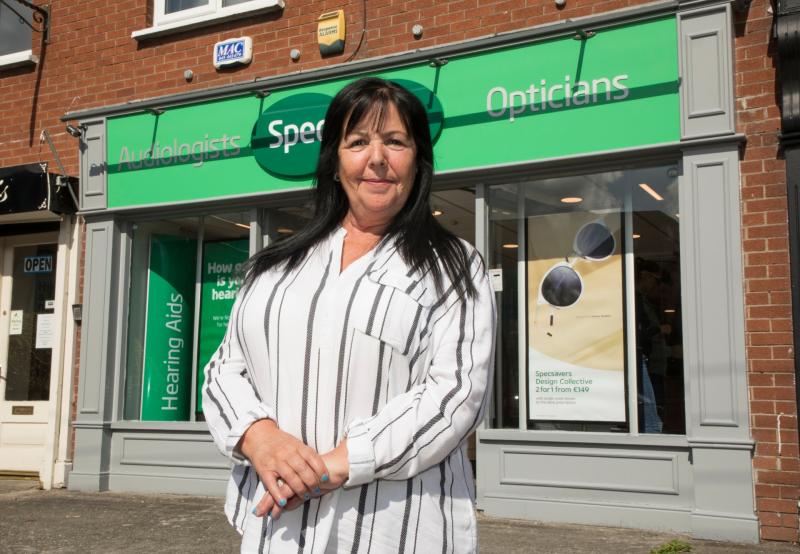 A visit to Specsavers Newbridge proved a lifesaving experience for Kildare native, Pauline McDermott (66), when her optometrist discovered a lump in the retina of her eye during a routine eye test.

As a glasses wearer, Pauline has always been mindful to undergo the recommended biennial eye exam and is now keen to raise awareness of the importance of regular eye tests after her recent experience with Specsavers.

Pauline visited her local Specsavers store in Newbridge for a routine check-up and to change her glasses, with no cause for concern about her eye health.

During the test, optometrist and store director Aengus Morrin identified an abnormal lesion in the retina of Pauline’s left eye.

Aengus says: ‘I was completing the final stages of Pauline’s eye exam, when I noticed a lump on the retina of her left eye. I asked Pauline if she had any concerns about her eyes at which point she mentioned that she had been experiencing intermittent flashes of light in her left eye recently. I explained to her that I had found a lump in the retina of the eye and that I wanted her to get seen by an ophthalmologist as soon as possible.’

Aengus immediately referred Pauline to the Royal Victoria Eye & Ear Hospital where further eye tests were carried out that day. It was here that Pauline was advised by Dr. Niall Horgan that she had a very rare type of tumour which needed to be operated on.

Just a week after her routine eye exam in Specsavers Newbridge, Pauline was admitted to St. Luke’s Hospital where the operation on the tumour was carried out. A small radioactive plate was inserted in the back of her eye to treat the tumour and Pauline.

In the same week, Pauline underwent a second operation to remove the plate from her eye.

Pauline says: ‘Everything happened within a week and a half of my initial appointment in Specsavers Newbridge, so it was really quite overwhelming, but I couldn’t commend Aengus more for his quick and professional response.’

Specsavers recommends that everyone should have an eye test every two years. An eye exam is much more than a sight test. Not only does the optometrist check a customer’s vision and monitor whether their sight is changing over time, but eye tests can also detect more serious, underlying health conditions such as diabetes, high blood pressure or even tumours.

Aengus continues: ‘50% of blindness and vision loss can be avoided when treated early which is why we encourage people to get their eyes tested regularly. As well as detecting sight problems and eye diseases, such as glaucoma or macular degeneration, the health of your eyes can tell a lot about your overall health. Eye tests can reveal whether you are suffering from a number of serious health conditions that are essentially silent and potentially fatal if not discovered early enough.

'On reflection, Pauline was very lucky that she routinely had her eyes checked and so we were able to make a quick referral. Specsavers urges people to take time out of their busy lives to prioritise regular eye checks, to incorporate them as part of their overall healthcare routine and to avoid ignoring important symptoms.’

Almost 18 months after her diagnosis and procedure, Pauline continues to go for six-month check-ups in the Eye & Ear Hospital and undergoes a liver scan twice a year. Pauline is eager to raise awareness of the importance of regular eye tests and is hopeful her story will motivate anyone procrastinating about an eye exam.

She thanked Specsavers for their professionalism and expertise as well as her family for their amazing support.

To make an appointment in any Specsavers opticians, log onto www.specsavers.ie to find your local store.