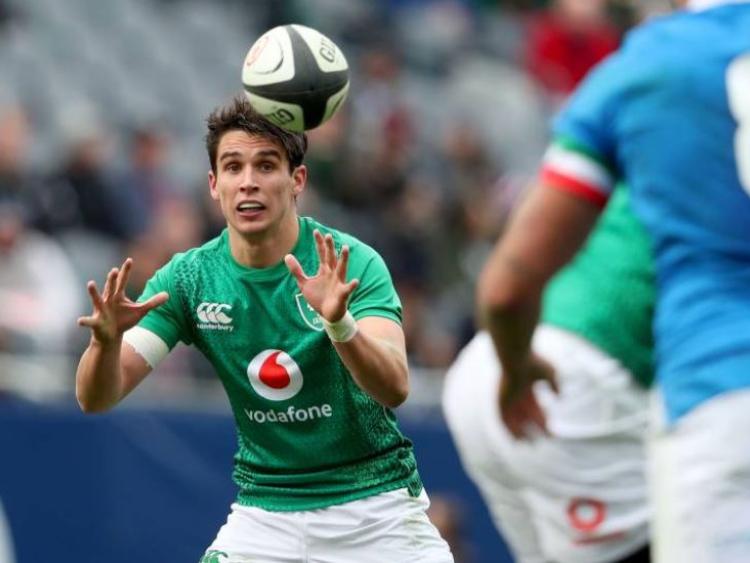 Carbery in action against Italy in the past. Image: IRFU

Athy's Joey Cabery has been selected at out-half for Ireland's warm-up game for the 2019 World Cup against Italy at Aviva Stadium on Saturday.

Eadestown native Tadhg Beirne has been included in the replacements.

The Ireland squad has been training at Carton Park outside Maynooth in recent weeks.

In a surprise announcement, Munster's Jean Kleyn will make his international debut against Italy.

The South African born lock joined Munster from the Stormers in summer 2016 and only became eligible for Ireland this month.

Another Munster player, full back Mike Haley, is also expected to make his debut off the bench against the Italians.

Haley, who has a Kerry-born grandfather, was previously been called up for England training camps and represented England Saxons in a South African tour of 2016.

Rhys Ruddock has been named captain of the side for the game, with Tommy O'Donnell and Jordi Murphy completing the back row trio.

The experienced Devin Toner will join Kleyn in the second row.

Luke McGrath will join Carbery as the half back pairing, while Jordan Larmour will start at full back.

Andrew Conway and Dave Kearney have been named on the wings.

Munster's Chris Farrell will join Garry Ringrose in the centre.

The Italy match is the first of Ireland's four part Guinness Summer Series in preparation for Japan, with games against England in Twickenham (24 August) and home and away ties against Wales (31 August in Cardiff, 7 September in Dublin) following in the month ahead.