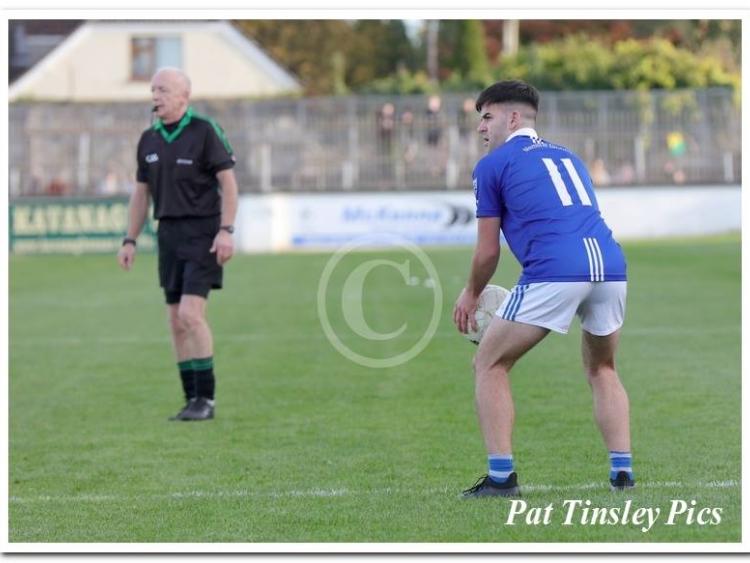 The always competitive Pittman Traffic Intermediate Football Championship returns this weekend with the group stages commencing on Saturday and Sunday.

The games are split between Clane and Manguard Plus Hawkfield with a few intriguing ties down for decision.

It all begins in Hawkfield on Saturday afternoon with the local derby meeting of Ellistown and Rathangan.

Both teams have had mixed years so far with Rathangan getting relegated from Division 2 of the Senior Football League after a miserable campaign while Ellistown maintained their status in Division 3.

Rathangan have got into the unwanted habit of losing games as they lost to Nurney in Round 1 aswell and while they may have better players on paper, Ellistown could be primed to cause a shock.

The Group 4 meeting of Kilcock and Ballyteague follows and looks a very attractive tie on paper.

With Division 3 League Champions and last years beaten County Finalists Monasterevan also in the Group it will be vital to make a good start.

Kilcock had a fine win over Clogherinkoe in Round 1 and they have the ability to repeat those heroics if they can shut down the influential Jimmy Hyland.

Ballyteague had a better League than their opponents but the Declan Gibbbons managed Kilcock side have plenty of talent in their ranks and they get the hesitant vote here.

The Final game on Saturday is the meeting of Sallins and Allenwood and again it’s a tough one to call.

Sallins defeated Allenwood a couple of weeks ago in the League but then suffered a heavy defeat against Monasterevan in the Final and while star forward Conor Herbert will be back from Holiday, Brian McGrogan’s Blues may have extra firepower in their ranks and they are fancied to come through a tight affair.

There are five games down for decision on Sunday which begins with the Group 1 tie between two of the favourites to take the overall crown in Clogherinkoe an St.Kevins.

Both had considerable representation on this years Kildare Junior side but the Cloughs have a real star in Jack Robinson and after he missed their first round defeat against Kilcock he can lead his side to a win over a Kevins side that had a disappointing League campaign which ended with Relegation to Division 3.

The second of the Clane Double-Header sees Leixlip and Straffan lock horns.

Up until the introduction of Padraig Nash Straffan looked set for a victory in Round 1 and while they are making good strides it’s still hard to look beyond a Leixlip side that have their eyes firmly on making an immediate return to the Senior Grade and they should have too much here.

The other game in that Group takes place in Hawkfield with Nurney and Kill colliding.

After a win in Round 1 and getting to the semi-finals last year Nurney will expect to advance from this group and that plan should start with a win against Kill.

Suncroft and Milltown is next up and this is another tough one to call.

Suncroft recently captured the Division 4 Shield and had an opening round victory over Kilcullen while Milltown have got something of a wake up call after their heroics last year with an opening round defeat against Ellistown followed by relegation to Division 4.

Milltown are capable of getting a win here but the class up front of Fionn Dowling and Eoghan Lawless will likely tell to get Suncroft up and running.

The weekend is rounded off with last year’s beaten finalists Monasterevan in action against Kilcullen and the South Kildare side should be much too strong for the Rags.

It’s a group Kilcullen could struggle in with Kilcock and Ballyteague also involved and Monasterevan are improving with every outing and getting players back all the time so they should be too good with the likes of Padraig Nash and Ryan Bannon in flying form.