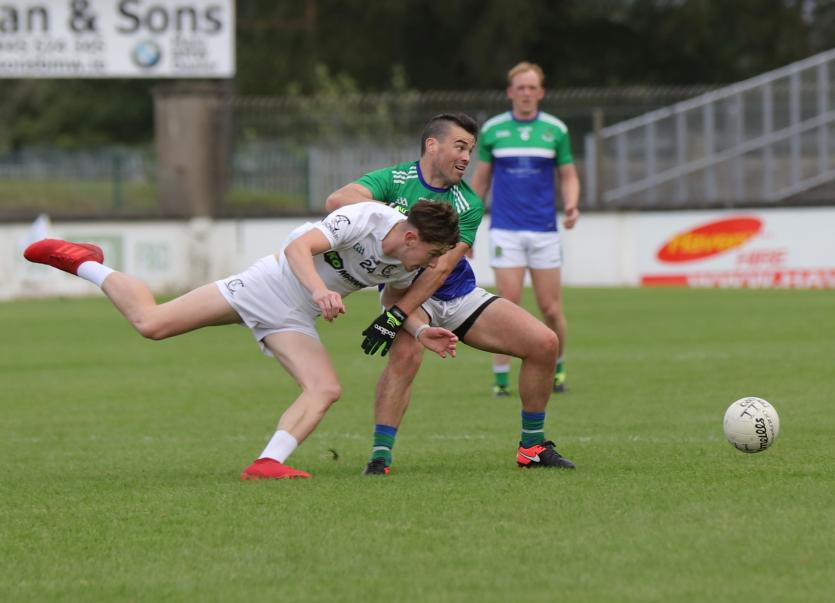 Johnstownbridge were left hanging on as they fought off a gallant Clane side in St.Conleths Park on Saturday afternoon.

Brian Flanagan’s outfit were 1/14 in a place ahead of the game and after beating Clane by eighteen points in 2018 it was expected to be relatively comfortable but it certainly didn’t play out like that near the end of the game.

With twenty minutes left Johnstownbridge led 0-11 to 0-3 and things looked to be going along expected lines but the final quarter changed everything with a 49th minute James Behan goal giving Clane momentum.

In truth the team in White could have even snatched a draw with the otherwise excellent Robbie Phillips pulling a shot wide in the dying moments.

No doubt Johnstownbride felt the loss of the injured Sam Doran but they seemed to sleepwalk through the game for large periods while Clane will have been pleased to have put in a much improved display.

The game marked the return to competitive action for Paul Cribbin and despite scoring two points from play you could tell he was still a bit rusty.

The matchups were fascinating with former county teammates Cian O’Donoghue and Daniel Flynn squaring up to each other and the Clane man did a fine job all told while down the other end and not for the first time Keith Cribbin did an expert man marking role this time against promising youngster Shane O’Sullivan.

Clane defied their underdog tag early on with points from Bernard Deay and Chris Byrne giving them an early cushion.

Johnstownbridge were slow to get out of the blocks but they were soon level when points in the 6th and 8th minutes from Daniel Flynn with his usual exuberance and Kelvin McNally brought the sides together at 0-2 apiece.

Clane incidentally didn’t score for the rest of the half and they were very fortunate not to concede a goal aswell after firstly Flynn flicked an effort towards goal from a Cathal McNally delivery but Paddy McKenna stood tall to deny him while seconds later Keith Cribbin rattled a rasping shot off the top of the crossbar.

Those misses didn’t overly affect the Bridge though as they duly added on another five points with a trio of frees from Kelvin McNally coming between scores from play by Flynn and Paul Cribbin.

As a result Johnstownbridge led 0-7 to 0-2 at the break and while in control Clane got the first point of the second half with an attempt from Sam McCormack splitting the posts.

Clane didn’t score again till the 39th minute and by that time they trailed by eight after Cribbin, Flynn, Eoin O’Donoghue and Cathal McNally all scored while the man effectionally known as Cotzy also had a goalbound effort saved when he palmed a shot towards goal from a Daniel Flynn pass.

It was a mystery really how Johnstownbridge didn’t find the net as Paul Cribbin went close when he played a shot across goal.

Those misses definitely gave Clane confidence and three points on the bounce had them back within sight with scores from Danny Egan and Bernard Deay.

Recently sat Leaving Cert student James Behan squandered a glorious opportunity for goal to get Clane even closer but when presented with another chance he made no mistake to leave just two points between them heading down the home straight.

Johnstownbridge steadied things with Kelvin McNally’s fifth free of the day but they couldn’t brush a young Clane side away who kept on coming with a pair of Danny Egan frees leaving just the bare minimum separating them.

Paul Cribbin missed a late chance to make sure of the result for Johnstownbridge and his heart would have been in his mouth when Robbie Phillips powered forward but the Clane half back couldn’t find the target as he pulled his shot wide and Johnstownbridge were able to breath a sigh of relief when referee Billy O’Connell blew the final whistle as they scraped to victory.