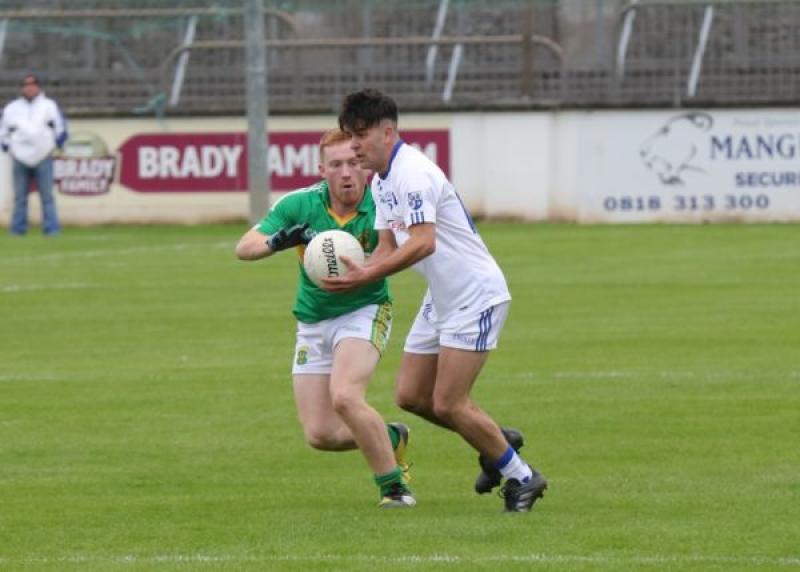 Monasterevan showed why they are one of the favourites to land the Intermediate Football Title as they landed an impressive success over Ballyteague at Manguard Plus Hawkfield on Friday Evening.

The game was about the two marksmen on show as Jimmy Hyland and Padraig Nash put on a scoring clinic for their respective sides but crucially Nash had a bit more around him as Monasterevan ran out four point winners.

The Division 3 League winners led by six points at the break and goals from Nash courtesy of a rebounded penalty and Kevin Fitzpatrick at the start of the second half settled the result in their direction.

Ballyteague led by Hyland fought back but they gave themselves too much to do in the end and even still they know a win over Kilcullen in the final round which would be expected will see them through to the next round.

Padraig and Nash and Kevin Fitzpatrick and another from Nash had Monasterevan three up after 12 minutes, Ballyteague struggling to get any decent possession early on.

Brain McGrath opened with a free mid-way through before DJ Earley converted a 45 with ease.

McGrath reduced the deficit but with Padraig Nash in brilliant form The Blues extended the lead, Nash converting two frees to leave it 0-6 to 0-2 after 24 minutes.

A lovely bit of individual class from  Nash saw him add another but then just before the break the match official, having been alerted by one of his linesmen, showed two red cards to Lenny Havens (Monasterevan) and Ballyteague's Pauric Murphy and in the 36 minute Padraig Nash added one more point as the half time whistle arrived, Monasterevan leading 0-8 to 0-2.

Points from Fionn Murphy and Brian McGrath reduced the deficit but a few minutes later Monasterevan were awarded a penalty, Padraig Nash's initial shot brilliant knocked away by Marc Herbert but only back to Nash who first timed it to the net to make it 2-8 to 0-4, just short of 40 minutes on the clock.

Two points from Jimmy Hyland were canceled out by two frees from Padraig Nash and Ryan Bannon but now Jimmy Hyland was in full flow, hitting four points in a row to reduce the deficit to five 56 on the clock

Padraig Nash reduced the growing pressure with a goal chance, blazed over, and while Hyland replied with a brilliant long range effort it was not enough as the final whistle arrived just after Gerry Melia picked up a second yellow.