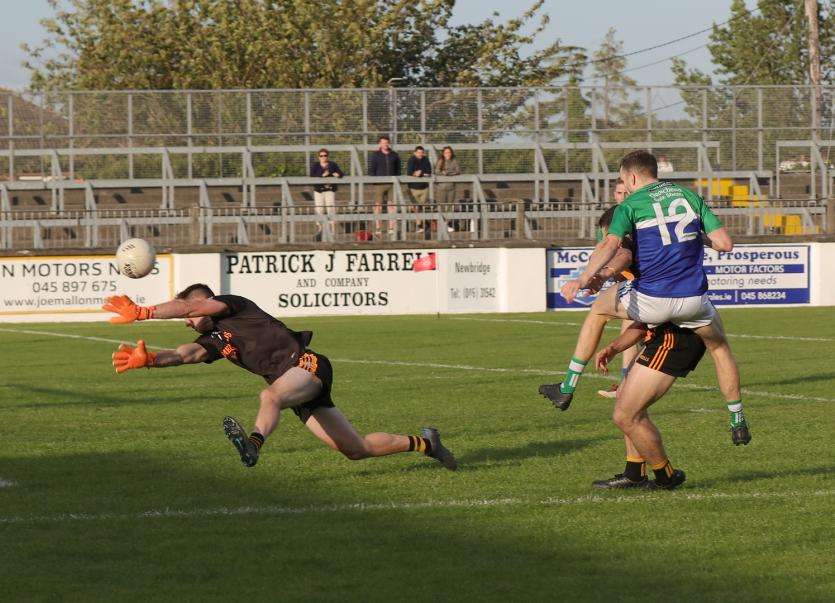 Cathal McNally on his way to scoring his second goal during Johnstownbridge's victory over Round Towers in St.Conleths Park on Saturday Evening. Photo Credit: Pat Tinsley

A Kelvin McNally free in the third minute of stoppage time gave Johnstownbridge a one point victory over Round Towers in St.Conleths Park on Saturday Evening.

McNally finished with two important frees but it was really the impact of brother Cathal that got them into a winning situation in the first place as he found the net on two occasions.

McNally’s efforts came in either half with his first a brilliant individual goal being especially crucial as Towers were playing well at the time and it helped stem the flow that had developed.

Towers with the aid of Neil Scanlon finishing with 1-6 were always in touch and if they were more ruthless in front of goal the result may have been different.

Its the second successive Saturday that Johnstownbridge have hobbled over the line against teams they were much more comfortable against in 2018 so a big improvement will be needed in their final Group game against Athy.

Both teams were rocked with injuries but especially Johnstownbridge as they had to line out without talisman Paul Cribbin after he picked up a knock in training.

Sam Doran was his replacement and he got the game’s opening score in the 2nd minute.

Towers responded with efforts from Evan Flynn and Neil Scanlon but Brian Flanagan’s Johnstown side maintained the early advantage with Doran’s second point followed by a typically flamboyant Daniel Flynn shot from distance.

Towers remained incredibly competitive though and they looked the better side for much of the half with three points from Neil Scanlon giving them a 0-5 to 0-3 lead entering the final few minutes of the half.

Johnstownbridge are always capable of something special though and in the 25th minute they provided just that when Seamus McNally found his namesake and goal threat Cathal and despite looking like nothing was on the forward beat three men before firing a left footed shot past Brian Robinson in the Towers goal.

It was then all about the Flynn’s as Luke Flynn followed up with a well taken 45 from near the sideline before Jamie and Daniel exchanged scores to leave Johnstownbridge with a 1-5 to 0-6 lead at the break.

Johnstown continued to make the running on the resumption with points from Doran and McNally pushing them four clear.

Towers responded via Flynn and David O’Neill but they were down in the dumps again when McNally took advantage of a poor clearance by Robinson to race clear and place a shot home to bring his tally to 2-1 for the day.

Another point or two would have probably sealed the result there and then for Johnstownbridge but instead they went scoreless for ten minutes and Towers came roaring back.

Flynn kicked his second 45 for the side in Black and Amber and they then struck for a goal of their own when a move involving Leon Tsang and John Dwyer resulted in the wing forward being fouled for a penalty which Neil Scanlon confidently put away.

Kelvin McNally steadied the Johnstown ship with a free to put them two up with just a couple of minutes left but again Towers came forward.

Two Scanlon frees levelled up matters and if it wasn’t for himself, Jamie Flynn and Stuart Murphy squandering further opportunities they could have snatched the win.

Those misses came back to haunt them as three minutes into stoppage time Keith Cribbin broke forward on the attack and after he was fouled Kelvin McNally confidently stepped forward to kick the winning free and get Johnstownbridge out of jail.