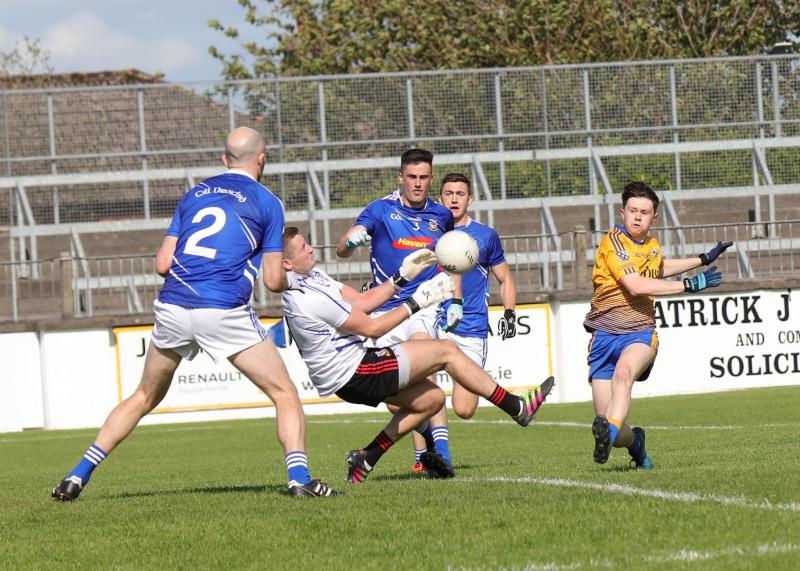 A second half Mark O’Sullivan goal was the difference as Celbridge overcame Carbury in a tame affair on Saturday afternoon.

Celbridge were always in control with their opposition only scoring two points from play and they never really got out of second gear as a result.

Like in the opening round victory over Raheens both Fergal Conway and Paddy Brophy stood out with impressive displays for the Hazelhatch Road outfit.

Carbury on the other hand looked a tired and jaded team and they are clearly suffering from being on the road six out of the last seven weekends and it may be no coincidence that themselves and Naas who partook in an extra-time League Final have lost both Championship games since.

Carbury did start well and were on the board after a couple of seconds with Jimmy Dunne kicking a fine point from distance.

Celbridge responded with a brace from Fergal Conway before one of his opposition in midfield Tom Colleary got a black card for a bodycheck off the ball.

Carbury weren’t overly affected by the Black Card though as Eoghan O’Flaherty brought the sides level with a free while Jack Cully on the back of an inside pass from Justin Reilly was denied by the quickly advanced Shane McNamara.

John Costello edged Celbridge back in front in the 18th minute but they were again lucky to not see their net rattling as a goalbound shot from James Kelly went over with the help of the crossbar.

It was all Celbridge for the rest of the half though with Paddy Brophy and Davy Hughes getting two points each as Paul Curran’s side went into the break with a 0-7 to 0-4 lead after O’Flaherty converted his second free.

Celbridge all but put the result to bed in the opening few minutes of the second half with David Byrne putting the lead out to four with a well taken score before the game’s only goal arrived in the 37th minute.

The goal came when a Fergal Conway shot for a point went up in the air and while Aaron O’Neill originally had the ball in his hands Mark O’Sullivan still managed to get a touch on the ball to force it over the line past Wayne Cummins in the Carbury goal.

Remarkably Carbury only had one scorer in the second half in Eoghan O’Flaherty and no score from play as the centre forward converted a pair of frees before Fergal Conway scored to maintain Celbridge’s six point lead.

Celbridge only scored once in the final quarter and during that scoreless spell two frees and a 45 from O’Flaherty had Carbury back with a chance.

Paddy Brophy at the start of injury time kicked what looked to be an insurance score before Niall Donnelly and Wayne Cummins got black cards for their respective sides late on.

O’Flaherty got his eight point before the end but it arrived too late to make a difference as Celbridge ran out three point winners.