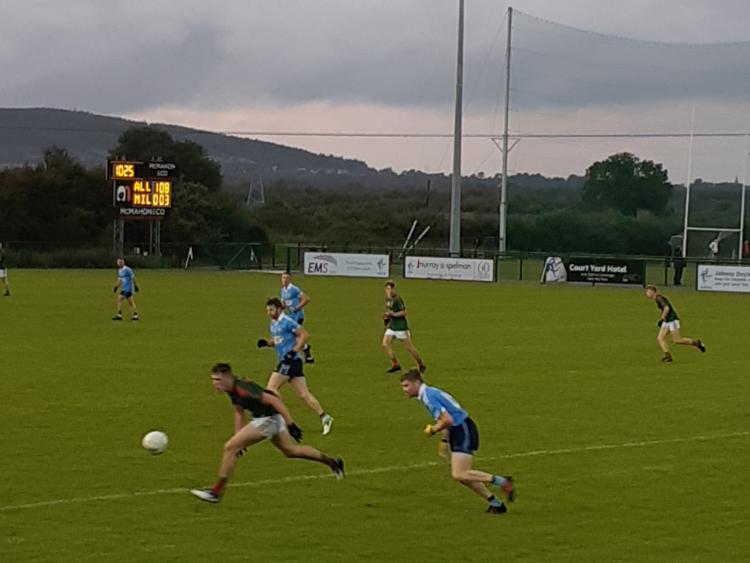 Clogherinkoe followed up on an impressive Round 1 victory over St.Kevins with a twenty point destruction of Ellistown on Monday Evening.

Without doubt the Cloughs are one of the teams to beat in this year's Championship and they were ruthless in the extreme with Jack Robinson and Cein McMonagle in particular starring.

The game was practically over as a contest in the opening few minutes when Clogherinkoe went 1-3 to 0-0 ahead with a Mark Nolan goal followed up by points from McMonagle and Robinson.

Andy O'Neill replied with a couple of points for Ellistown but Clogherinkoe seemed to be in a different league and they kicked clear again with Robinson and McMonagle who scored 2-12 between them scoring on the back of a Mark Grehan effort from distance.

Robinson ended with seven first half points and he could have had a goal if he was more clinical but after Ellistown's Eoin O'Loughlin kicked a stoppage time score Clogherinkoe went into the break leading 1-12  to 0-3.

Clogherinkoe's tour de force was even more destructive after the break as they added three more goals and McMonagle got the first of these with a well worked strike after Robinson and Daniel Grehan had earlier found the target.

Gavin Scanlon, Jamie Boyle and Jack Donegan all got in on the act before Ellistown hit something of a purple patch as they missed a couple of opportunities for goal but O'Neill and O'Loughlin still kicked a couple of points.

Clogherinkoe finished in style though with sub Boyle bringing his tally to 1-1 with a well taken goal and Robinson who had threatened to find the net all night eventually did so late on to put the icing on an emphatic success.

Goals in either half from Johnny Doyle and Darren Judge gave Allenwood a convincing local derby win over Milltown on Tuesday night.

Judge's goal arrived in the 2nd minute and it was plain sailing from there on for Brian McGrogan's outfit with Milltown struggling for scores.

Judge's effort came after he took advantage on the rebound after a point attempt from Darragh Malone came off the post and directly into his grasp.

Mark Byrne added to the tally moments later before Judge had another goal chance but he was blocked near the goaline but he still kicked his first point soon after.

Robbie Scully got Milltown on the board in the 11th minute but successive scores from the midfielder pairing of Johnny Doyle and Johnny Byrne had the Blues in a 1-4 to 0-1 lead.

Doyle and Alan Dignam then exchanged frees as Allenwood had the advantage of a six point margin going in to half-time.

Judge who finished with 1-3 and Billy Maher pushed the scoreline out to nine points in Allenwood's favour at the start of the second half and it was always an uphill task for Milltown from there.

They remained competitive though with sub Thomas Hamilton landing a brace as well as Dignam kicking his second free.

The game was put beyond their reach come the halfway mark of the half though as after Byrne kicked his second point, Darragh Malone instinctively found Johnny Doyle and the hugely experienced midfielder used all his years to fend off the Milltown full back before firing past Paul Mulhall.

The contest strolled to its inevitable conclusion from there with two Dignam frees only being of the consolation type as Doyle, Shane Smullen and Darragh Malone all pointed to give Allenwood a deserved victory.