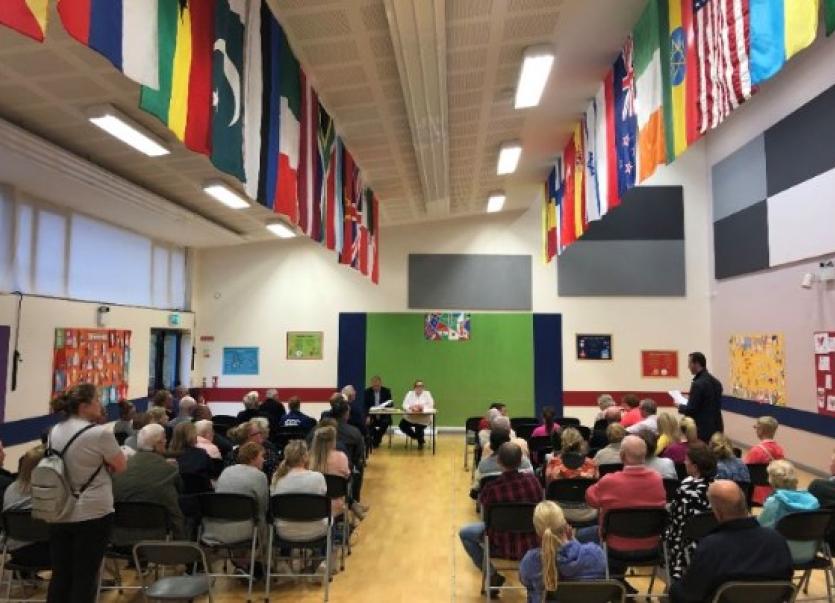 The large attendance at tonight’s meeting

Residents in Kildare Town said they may consider fundraising up to €30,000 to mount a court action to oppose a large housing plan for the former Magee Barracks site.

Locals gathered at a public meeting in Kildare Town this evening to discuss the massive development for the ex military location.

Mayor of Kildare, Cllr Suzanne Doyle said up to €30,000 may be needed to pay for a judicial review in the High Court if An Bord Pleanála grants permission for the project.

The meeting heard that employment and leisure facilities were badly needed in the Magee site and that the proposed homes would lead to a potential influx of 1,000 new residents which would not be sustainable.

Planning permission has been applied for 375 homes (comprising 185 houses and 190 apartments), three shops, a café and creche on an 11 hectare plot.

The planning application was lodged on July 26 with An Bord Pleanála (ABP) under the new Strategic Housing Development process and a decision is due to be made before November 14.

Workshops are being planned for next week to assist people to compile third party submissions before the August 29 deadline.

Councillors will discuss the issue at the next local Municipal District meeting on September 18 and the Council's Chief Executive must submit a report to ABP the following day.

The Strategic Housing Development application system allows developers seeking permission for 100 residential units or more to bypass local authorities and apply directly to ABP instead of the local authority.

Dublin-based Ballymount Properties Ltd have upscaled the original designs rejected by ABP last year to include more than 100 more homes - from 264 units to 375 units of varying sizes - and have also increased the number of Barracks building to be demolished from 16 to 17.

Cllr Doyle, who called a public meeting in Educate Together School Hall, told the audience: "If required, we may have to raise up to €30,000 to fund a judicial review in the High Court."

The meeting, which was attended by about 80 people, was also addressed by Cllr Mark Stafford, Cllr Mark Wall, Cllr Patricia Ryan and Cllr Fiona McLoughlin Healy.

Many residents believe that parts of the Magee Barracks site should be used to create employment and leisure facilities rather than exclusively housing so workers don't have to commute out of the town in such big numbers.

They also have a view that any development must be balanced and sustainable as part of a growing community.

According to Ballymount Properties Ltd, the 375 housing units will be made up of 92 2-bed apartments while there will be also 76 3-bed semi-detached houses.

A total of 60 4-bed semi-detached houses are also in the plans as well as 46 one-bed apartments.