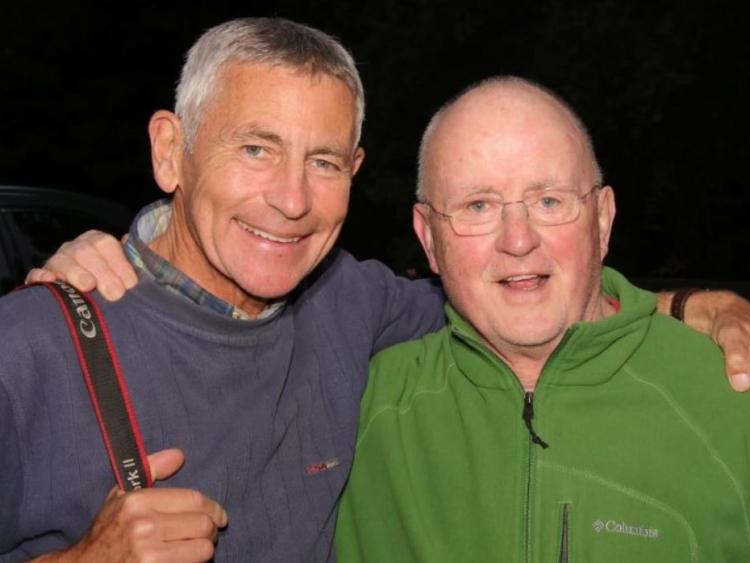 An Appreciation Night will be hosted on August 30 in McDonnells, Newbridge for Pat, left, photographed here with another local legend, Christy Moore

This is a long post, with a lot of reading so apologies in advance. But given that Pat Tinsley has contributed so much over the past decades, by way of his photography, I believe this event, and Pat's illness merits the additional coverage.

Amyloidosis is a degenerative disease and one I certainly had never heard of prior to Pat's diagnosis last year. Pat has been a contributing freelance photographer to the Kildare Post and KildareNow, but one I think most people would consider as Newbridge town's personal photographer.

He has covered every major GAA sporting event  from St Conleth's to Croke Park. His skills as a sport photographer are renowned but it's his ability to capture the essence of the moment, combined with his witty captions, that makes his work so endearing. 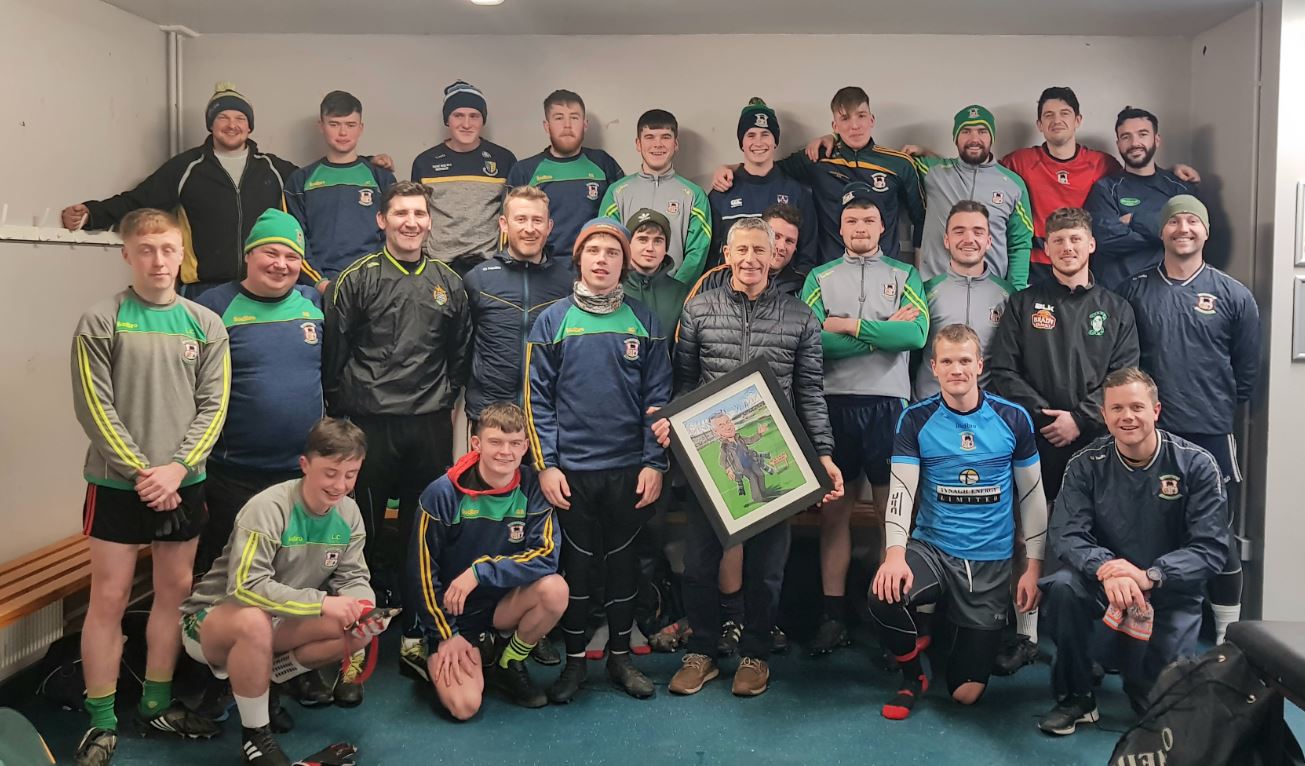 The utter joy as a captain raises the hard won cup; the tearful child on the sideline when their home side has lost; the colour and spectacle of St Patrick's Day Parade in Newbridge - from the Gardaí joining in a little dance to an infant tackling a giant 99 cone!

Jackie Tyrell considers Pat a 'preserver of Newbridge memories'. Speaking to KildareNow, she stated: “Is there any major event in recent decades in Newbridge that he hasn't captured? I've been involved in JuneFest since 2012 and without fail, Pat has attended events and supplied us with tons of photos – and,notably, without ever submitting an invoice. No matter what I needed to promote, he supplied the photos. He is there for everything, whether its yarn bombing, Lark – or Bark - in the Park, he has been a rock of support to JuneFest”.

Jackie further noted it is Pat's photographs that capture the heart of the people and community of Newbridge, from the annual St Patrick's Day Parade, to visiting contingents from twinned towns of Ocala and Bad Lippespringe; Newbridge Musical Society's annual productions;St Conleth's Pantomime Troupe; Relay for Life events; Hope D Light Up The Skies; Save Newbridge Credit Union Campaign and charity events in support of the late Princess Leah, the late Paddy Butler, to mention but a few. 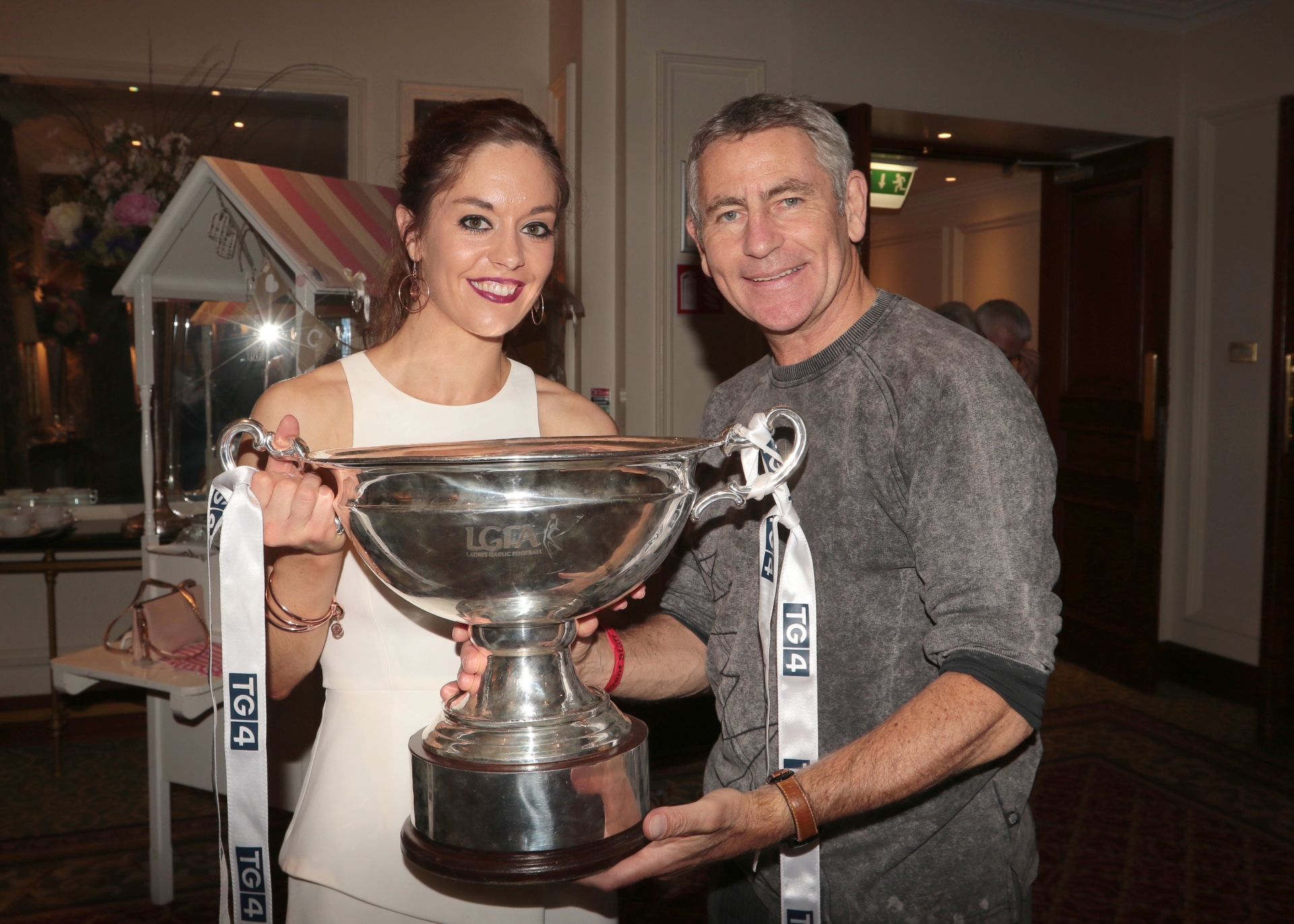 “Pat has given his time and talents to so many community, charity and special events in Newbridge” Jackie added. “He has captured so many events and features introduced to the area in recent years, such as the Fionn MacCumhaill roundabout near the Curragh; Christmas lighting around the town, especially iconic buildings such as St Conleth's Parish Church, Newbridge Town Hall, Hill of Allen Tower and Newbridge College.

Pat also a founded Newbridge Down Memory Lane with Liz Kett. This Facebook community page is an outstanding resource for locals and the Newbridge diaspora to share photos and memories. So popular is this page that membership has grown to 7.7k in recent years.

“Pat's generosity in supporting all the major projects and events in Newbridge, along with knowing his photographs will be the archival material available to future generations led to us establishing an appreciation night for Pat” added Jackie.

“Eric McDonnell Junior of McDonnell's pub, along with his dad, Eric Senior of Ryston Sports Club, Ronan Sweeney (ex county senior player) and myself decided to organise a night and call on the parish and wider sporting community to row in and support. And the support to date for Pat's Appreciation Night has been tremendous”.

She continued “A night at McDonnell's is planned for August 30; Eric McDonnell will kindly donate the drink sales' profit from the night; Johnny Petere along with D Mac and friends will entertain, and already, there are other musicians offering to play on the night. Pat's cousin Paddy Tinsley will be travelling home from Germany, also to entertain!”.

Tickets are currently on sale at The Kiosk, Newbridge; McDonnell's pub; Fiona O'Loughlin's office; Moorefield GAA or from Kildare Post at 086 895 6097. Tickets are €10pp and include live music, BBQ food, and entry into a mega raffle. “Even if you can't attend, put your name on the back of your ticket, return to the seller and you'll be entered on the night” added Jackie.

Despite Pat being so well known as the photographer about town in Newbridge, take the camera away and he is not so comfortable or confident being the focus of attention. Somewhat taken aback initially on learning of the appreciation night, he is now looking forward to the event.

A man who was used to having great stamina and very little sleep, his health has been gradually deteriorating over the years. Almost 10 years ago, he was experiencing respiratory issues, and was diagnosed with upper respiratory tract infections.

“I was working at Pfizer, Newbridge and coughing so much, that I went to the A&E in Naas Hospital where a respiratory tract infection was diagnosed. Had they done an Echocardiogram back then, it might have shown that it was something much more serious”.

Over the following years Pat constantly battled ever-growing fatigue, a constant cough with bouts of dizziness (Hypotension). Last year,March 2018, his health had deteriorated so much, his doctor referred him again to A&E, Naas. Unfortunately, he was released after a 24 hour stay, but quickly referred again two days later by his GP Dr Noel Caffrey who knew there was something serious at the root of his failing health.

After 6 weeks in hospital, between Naas and Tallaght, and a specialist scan in London's Royal Free Hospital, finally a diagnosis of Amyloidosis (hATTR) or Hereditary Amyloidosis was confirmed but he had to wait another 6 weeks for the results of gene testing to discover the exact variation of the disease.

I certainly had never heard of it. Pat's variation is degenerative and fatal with a life expectancy of two to 12 years depending on the level of damage done by the time it is diagnosed.The disease is caused by a gene change (mutation) that affects the function of a protein in the blood called transthyretin (TTR). This protein is produced in the liver and helps to carry substances such as vitamin A. But a gene mutation will cause changes in the TTR protein thus causing it to misfold/take on an abnormal shape. This in turn causes excess protein to gather and build up deposits in the nervous (nerve), cardiac (heart), and gastrointestinal (digestive) systems. It can affect several organs. Pat's symptom's include Polyneuropathy, Cardiomyopathy, Autonomic Neuropathy and Hypotension.

Recently, Aslan singer Christy Dignam has highlighted his battle with the condition, his being AL Amyloidosis, the more common type. There is a third strain, known as AA Amyloidosis, which can also affect the kidneys. Dignam was excited recently and tweeted of a new treatment in the UK purporting to limit the progression of the disease but realised quickly that the treatment was effective in treating Pat's condition, hATTR, but not AL or AA.

Martin McGuinness lived and died from the disease, referred commonly in the north as 'The Donegal Disease'. A recent storyline in British soap, Emmerdale, saw a lead character being diagnosed with the disease, and Pat says he knows of at least two other men in Newbridge who have AL Amyloidosis(70% of all amyloidosis cases are men).

What are the treatment options for Pat?

“More recently, a new form of medicine called "gene-silencing" has come to the fore in the UK. It has been approved by the NHS in England and to date, the results have been positive. Through clinical trials the drug Patisiran has had life-changing results for brothers Vince and Neil Nicholas who lost their mother and a sibling to the disease. Professor Julian Gillmore, the lead for hATTR amyloidosis at Royal Free Hospital, said: “This is an incredible drug, which can completely change what these patients experience. It is pretty close to a miracle."

British media say doctors reported the gene-silencing is making an impact in fighting the "previously untreatable" disease and has huge potential for other diseases like cancer, etc. But herein lies a major issue for Pat, who as he put it succingtly “I don't have time to wait!” Professor Gillmore wants to put him on the drug (an infusion every 3 weeks) but Pat says the HSE has told him that the Treatment Abroad Scheme (TAS) does not cover "novel treatment or drugs" and declined his application to see a Dr Mary Reilly, a leading neurologist at the National Hospital for Neurology and Neurosurgery in London. Dr Mary Reilly would determine the next step forward for Pat but subsequently, a provisional appointment with her was cancelled when he returned to the Amyloidosis Clinic recently for his half yearly check up.

Aside from battling constant fatigue, breathing issues, diarrhea, walking difficulties, nausea and dizzy spells, Pat is exhausted with having to address paper work and red tape to access his treatment in the UK.

“I take inspiration from my niece Orla; all her life she fought her illness and the health system. I keep her in mind when I sometimes feel overwhelmed by my symptoms”.

HATTR is known as hereditary amyloidosis, and when Pat investigated his mother's side of the family, he discovered no less than 12 people in the extended family who have had the disease and died in the past 30 years.

Not only is the fatigue hard to cope with, but Pat finds his loss of appetite an unbearable impact. “There is no joy in eating for me anymore. My taste is affected, so there's no joy in eating and so many organs are affected, that I feel I'm battling head and body 24/7.”

However, as always, he is positive and he echoes Orla's mantra in stating "Failure is not an option" but he is not very optimistic about winning his looming battle with funding for the new treatment overseas.

He continued: “I was taking aback when I heard about the appreciation night; had I been asked, I'd have said no, I don't actually like being the centre of attention! But now, I'm looking forward immensely to the night. People have been very supportive and the amount of goodwill messages I'm getting on social media has been amazing. I'm especially delighted that my singer\songwriter cousin Paddy Tinsley is making the trip from Germany and will sing a few songs on the night. I'd also especially like to acknowledge Pat Duffy of PG Duffy & Sons,Sean Hall of Manguard Plus, Maura Donohoe(Maura Donohoe Auctioneers) and my doctor Noel Caffrey...they have been so kind and supportive to me in recent years”.

On the night, some of Pat's iconic photographs will be on display at McDonnell's Bar. Pat Tinsley Appreciation Night, August 30. Commencing at 8pm, admission €10 including a fab line up of music, BBQ and entry to a monster raffle for really fabulous prizes.