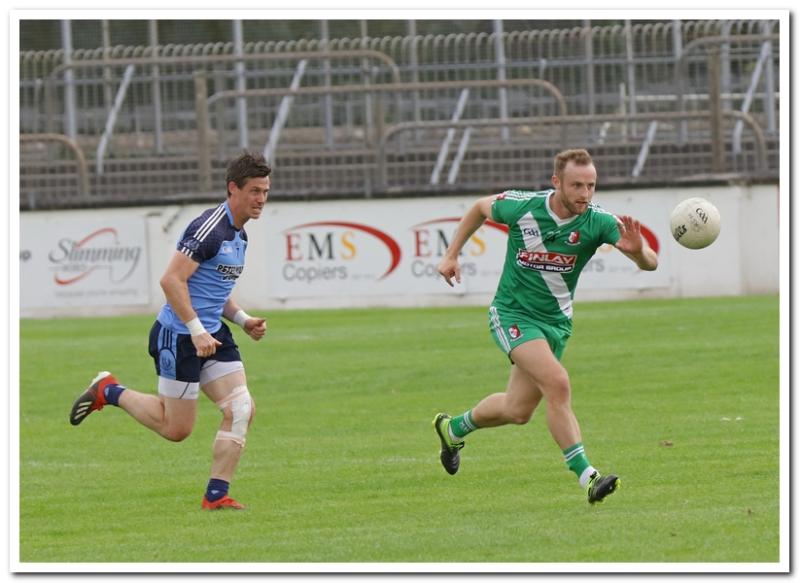 Alan Smith of Sarsfields gets to the ball in front of Eadestown's Emmet Bolton during Saturday's Senior Football Championship clash in St.Conleths Park

Sarsfields are into the knockout stages of the Senior Football Championship after getting the better of Eadestown on Saturday afternoon.

Goals in either half from Ray Cahill and Declan McKenna set the Sash up for victory but it was the performance of Alan Smith at full forward that really stood out as he finished with five points from play.

Without being overly impressive Sarsfields were good value for the nine point success and they seem to be improving the longer the season goes on.

Eadestown will be disappointed with the defeat but it’s a marked improvement on a year ago when they were heavily beaten by the same opposition and the influx of a couple of talented young players has certainly aided their cause.

Cian Bolton got the scoring underway with a free in the opening minute for Eadestown but Sarsfields responded in style with points from Ray Cahill, Alan Smith and Matty Byrne giving them a two point advantage.

Bolton hit back with a well taken free from distance but Smith’s second point from play when he cut inside well before shooting extended the Sarsfields lead at 0-4 to 0-2.

On the break Eadestown looked a threat and in the 17th minute they were just out of luck when Padraig Tuohy pulled a shot just wide from a difficult angle.

That miss came back to haunt Eadestown as minutes later Sarsfields added on 1-3 without reply to push ahead.

Smith, Cahill and Caoimhin McDonnell added on the points before the Newbridge side won a penalty when an attempted Ray Cahill pass squirted up into the air and although Shane Doyle lost control of the ball Cian Costigan was there to sweep up and he was duly taken down for the spot kick which Cahill finished with aplomb.

The game could have went either way for Liam McLoughlin’s Eadestown side at that stage but they battled on with a John Lawler point from play added to by a fine individual goal from Bolton when he powered through the Sarsfields defence.

Bolton and Conor McCarthy then kicked over frees before the end of the half as Sarsfields went into the break leading 1-7 to 1-5.

Sarsfields powered clear at the beginning of the second half when they hit another spurt of scoring with 1-2 on the trot before Eadestown got on the board.

Whatever Davy Burke said at half-time certainly worked for Sarsfields as they created three goal chances in that period with Shane Doyle having a shot well saved by Mark Murphy before Alan Smith elected to fist over with the goal at his mercy.

Cahill also kicked his third free while in the 40th minute Smith found sub Declan McKenna free in the square for him to palm a shot to the net.

Eoin Conneff stemmed the flow with an Eadestown point but Sarsfields always had a response with Conor Hartley and Ciaran McEnerney Aspell kicking scores from play.

That left Sarsfields ahead on a 2-11 to 1-6 scoreline at the halfway mark of the half and it was fairly routine from there after when Smith and Byrne added on points.

Bolton kept Eadestown in touch with a point from play and he also saw a goalbound effort deflect wide but they couldn’t get any closer as the teams swapped efforts with McKenna and Cahill extending their tallies in response to Eadestown scores from McCarthy and Padraic Tuohy.

There was still late drama with Cian McQuillian and Eoin Cummins getting in an altercation on the sideline and after the McQuillian swung back at Cummins the Sarsfields man was given a straight red card with Cummins escaping with yellow and the full time whistle was blown by Padraig McGivern moments later with Sarsfields running out commanding winners.