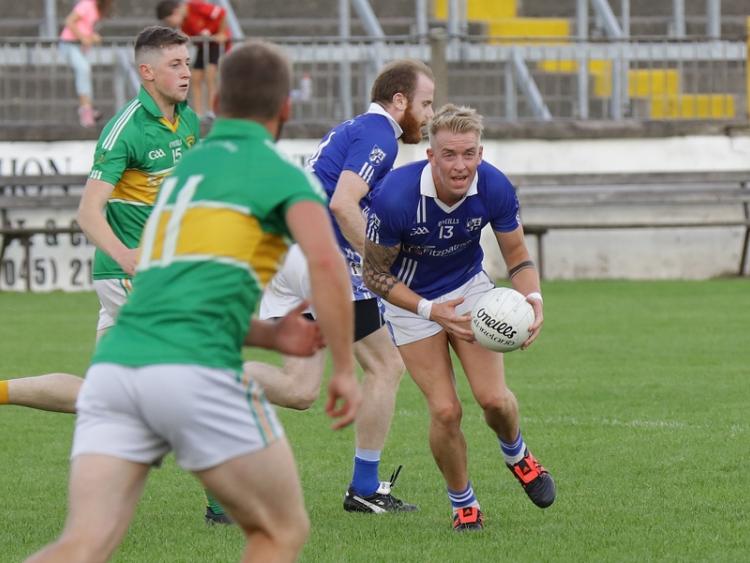 Despite star forward Padraig Nash only playing half the game Monasterevan had enough about themselves to seal a one point win over Kilcock in the final group game in the Intermediate Championship on Sunday Evening.

Goals in each half from Paul Maloney and John O’Toole gave Brian Lonergan’s team the edge and despite fierce pressure from their opposition they were able to hold out.

Nash appeared as a sub for the black carded Gavin Worrell which led to Shane O’Rourke’s goal for Kilcock and his knee was heavily strapped but appeared to be moving ok and kicked a second hal point.

In a slow burner of a contest it took eight minutes for the opening score with Darren Acton kicking Kilcock in front with a lovely effort from play.

Shane O’Rourke missed a rather routine looking free afterwards and Monasterevan then found their flow with three points in a row as Paul Maloney, John O’Toole and Ryan Bannon all found the target with O’Toole’s score particularly striking as he powered clear of a number of defenders.

Kilcock soon refound their mojo however when Shane O’Rourke was brought down inside the square for a penalty which resulted in Monasterevan full back Gavin Worrell getting a black card and Daragh McArdle made no mistake is stroking the kick home.

McArdle’s midfield partner Mark Durkan then kicked Declan Gibbons’s side back into the lead but it didn’t last long as right on the stroke of half-time Monasterevan found the net when a long sideline ball from Ryan Bannon hovered over the square and Maloney was there to fist home and give his side a 1-4 to 1-2 advantage at the break.

Bannon with his second free kicked Monasterevan three clear at the beginning of the second period before goalkeeper Aaron Bannon brilliantly denied Sean Maguire from close range as Kilcock had to be content with a point.

O’Rourke from a free had the deficit back to a point and Kilcock looked primed to strike before Monasterevan got one of the goals of the Championship thus far when Padraig Nash who came in for the black carded Worrell offloaded to O’Toole and he rattled a shot into the top corner past the stricken Fionn Talbot.

Kilcock didn’t throw in the towel though and a brace by O’Rourke from play as well as a score from sub David Duke had just the minimum separating the teams once more.

Monasterevan were always capable of keeping their noses in front though as Nash kicked his first point of the game with three minutes remaining.

O’Rourke replied with a 64th minute free and the forward had one last chance to level the game but he screwed his effort wide as Monasterevan took the win which means Kilcock will now join Ballyteague in the preliminary Quarter-Finals.