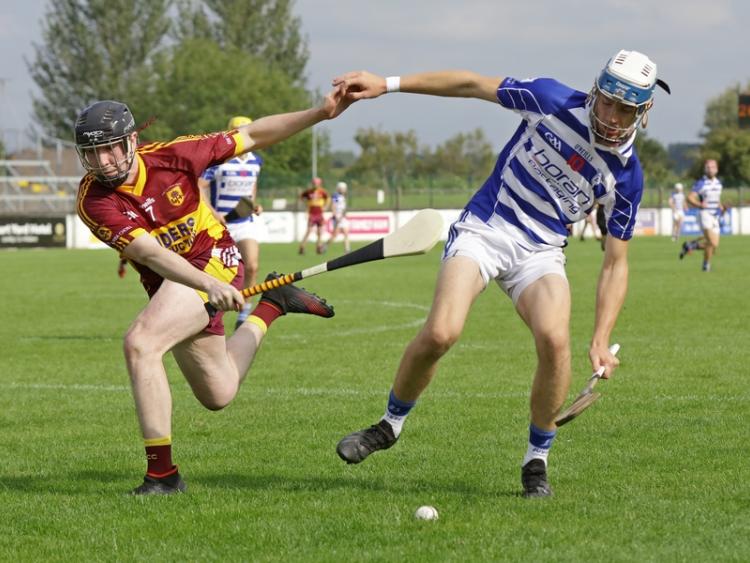 Senior Hurling Championship Group A Round 3

Naas rounded off on a 100% record in the winners group of the Senior Hurling Championship with a commanding victory over Eire Og Chorrachoill at St.Conleths Park on Sunday afternoon.

Eire Og only scored five points from play and were largely dependent on the free taking exploits of Liam Dempsey whereas Naas were able to get scores from all angles but it was Jack Sheridan who really stole the show as he scored 1-8  with 1-3 from play as well as landing two sideline cuts in an impressive showing where he showed all his class.

The win gives Naas a semi-final spot while Eire Og will have to make do with a quarter-final against Celbridge in a couple of weeks.

Eire Og were in Naas’s faces early on and the game was close at the beginning as the Donore based outfit went into a 0-2 to 0-1 lead with a free from Liam Dempsey and a score from play by Barry Cormack.

Naas’s solitary score during that period came from the stick of Brian Byrne and the dual star then knocked over two further points to give his side the lead for the first time which was then extended to three points by Shane Ryan and Philip Cocoman.

Naas only scored one point between the 12th and 24th minutes though as Eire Og regained control through efforts from Dempsey, Tim Hennessy, Rory O’Neill and Garry Johnson.

Naas steadied the ship through Sheridan and Cathal Dowling to level the game at 0-7 apiece before Eire Og went back in front with another free from Dempsey.

It would turn out to be the last time they had their heads in front as after Sheridan equalised with a sublime sideline cut himself and Ryan increased their totals to give Naas a 0-10 to 0-8 interval lead after an action packed half of Hurling.

Despite Dempsey reducing the deficit at the beginning of the second half it was a thirty minutes that almost exclusively belonged to Naas with Sheridan calmly landing another sideline cut on the back of his own free and a James Burks score from play after Shane Ryan was brilliantly denied for goal by Paul Dermody.

A Dempsey free soon followed for Eire Og to leave just three between the sides but that soon changed when a Cocoman score came a few moments before James Burke was fouled in the square by Cathal McGrath for a penalty which Sheridan rattled home.

Barry Cormack then knocked over Eire Og’s last score from play in the 42nd minute and from there Naas just went through the gears with Sheridan, Ryan, Shane Broderick and Mark Nevin all knocking over points at their leisure.

Dempsey responded with three frees for the beaten side but Naas finished in style and after Dermody denied him on a number of occasions corner forward Shane Ryan finally got his goal in stoppage time to bookend the twelve point success.